For many guitarists, a 4×12 cabinet represents the authentic sound of rock, and has done for decades. And it seems that the popularity of the 4×12 is carrying over strongly into the digital world too – here at Celestion, we consistently sell more 4×12 impulse responses than any other cabinet type.

Which got us wondering… Is our relationship with the 4×12 changing and could IRs ever completely replace the traditional 4×12 cabinet?

To try and answer these questions, here we take a look at where the 4×12 came from, why it became so popular, and what real guitarists are saying about this rock icon over 50 years on. 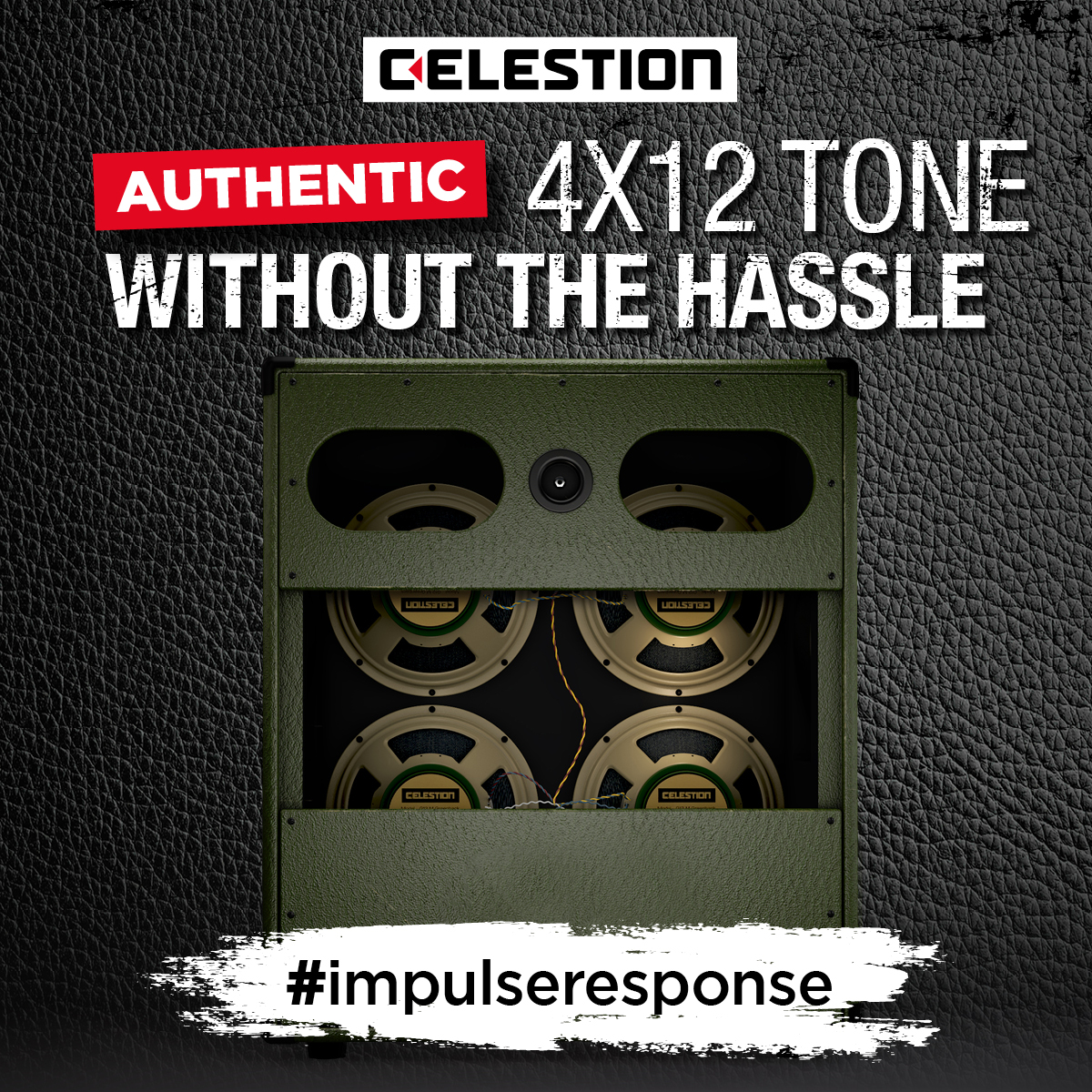 In the early days of rock, British bands like The Who and Small Faces were looking for more and more volume as part of their sound, but most venues of the day weren’t equipped with the powerful PA systems that are more commonplace nowadays. So, if you were a band that needed a lot of power, you had to bring that power with you – especially if you were playing larger venues or outdoor gigs. Back then, both amp power and speaker wattages were very modest – so a cabinet containing multiple speakers was the only way to achieve high volume without blowing the speakers.

In 1965 the very first 4×12 was made in London by Jim Marshall– and contained four Celestion Alnico speakers in a closed back design. These early 4×12s were quickly taken up by guitarists such as Pete Townshend of The Who, and later by Jimi Hendrix, who became an avid Marshall (and Celestion) user during his visit to London in 1966. However, the overall amplifier power used was still only 45 watts, rising to 50 watts in 1966 with the launch of the JTM50.

But 50 watts was still not enough to satisfy the ambitions of Pete Townshend and, once the idea of a multi-speaker cabinet was established, there was a short-lived arms race to achieve even higher power configurations. While Marshall did their bit by developing the 100W amp in 1966, Pete Townshend wanted to match this new power with an even bigger cabinet, and asked for some 8×12s to be built. 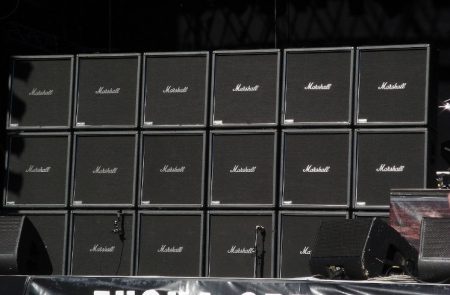 However, many of The Who’s roadies balked at carrying 8×12s (Townshend and John Entwistle had two each!) and quit. Eventually a solution was found – stacking 4×12s on top of each other. And thus, both the 4×12 itself, and the concept of the stack was established, quickly becoming part of not just the sound, but very much the look of rock & roll for more than 50 years. Far more than sound equipment, 4×12s have become an essential part of the atmosphere and experience of being at a rock concert, establishing a strong emotional connection with fans and, of course, new generations of rock guitarists wanting to emulate their heroes.

The Rise of the 4×12 Impulse Response

Back in September 2017, when we noticed the huge popularity of our 4×12 cabinet IRs we decided to ask our Facebook followers: “Hands up who takes a 4×12 to gig with them these days?”

Our question received no fewer than 439 replies – with hundreds more comments on those. So it’s fair to say this is a topic that a lot of guitarists really care about!

You can read the full post and everyone’s original comments here, but here is a quick summary of the main themes that emerged from our followers:

There were a significant number of people who, even if they love the sound of a 4×12, have moved away from using them at gigs, for a range of reasons:

Weight and size – By far the most common reason mentioned, many have stopped using 4×12s due to their size and weight, with some players citing their age as an issue.

Improved 2×12s – Many said that a modern, higher powered 2×12 gives them all the volume they need. So a modern high power amp with just two higher wattage speakers can now very realistically produce the same level of volume as a ‘60s 4×12. A few even mentioned moving to a 1×12. Replacing a 4×12 with two 2×12s was a common compromise.

Improved venue facilities – Modern PA systems are offering bands increasingly better amplification as well as better sound quality. And with the right sound guy and some good EQ, you can also get great rock tone without needing an actual 4×12 in the room.

Speaker impulses – Several people said they now regularly use impulse responses for gigs, replacing speaker cabinets completely. These people agreed that using our IRs gives them the deeper, fuller tone of a 4×12 that they want, but without having to carry heavy kit around with them.

But, as you’d expect, there are also a lot of people are intensely loyal to their 4×12s, for a variety of reasons:

Tradition – For some, the very idea of not using one is just unthinkable!

Appearance – 4×12s are seen by many as being an essential part of setting the scene for a ‘proper’ rock gig.

Necessity – 4×12s are still seen as a technical necessity for outdoor gigs and some venues which are big enough to require 4×12 volume but not big enough to have its own good quality PA system. For these situations, bringing your own 4×12 is still the only way to go.

Lighter options – Some players have solved the weight issue by filling their 4×12s with lighter neodymium speakers (4 × Vintage 30s weigh over 40lbs, while 4 × Neo Creambacks weigh less than 17lbs). Others mentioned retaining a 4×12 cabinet for appearances sake, but installing only two speakers.

On the fence between the 4×12 naysayers and the loyalists, there were also a good number of people who took a more pragmatic approach. They loved the tone of a 4×12 and still used it where it was the only way to achieve the right volume and sound – but they would also happily switch to an alternative option where available – either analogue or digital – depending on the venue and situation.

Clearly, guitarists’ thoughts about the 4×12 are varied and complex, involving a whole range of influences encompassing both the technical and the sentimental. With all these factors in mind, can we say anything meaningful about the long-term future of the 4×12?

It’s clear that we’re seeing a time of transition for the 4×12.

Increasingly, guitarists have a bigger range of choices for achieving both volume and tone: with high wattage 2×12s as an alternative analogue solution, and authentic sounding impulse responses as a digital solution.

We can expect that as more guitarists start to use Celestion IRs at home for practice and recording, it will simply seem a natural step to use them for live performances also.

But we do not expect there to be a complete abandonment of the 4×12 for these other options, however good they may be technically or tonally.

And that’s because the decision about what type of cabinet to use has always – and will always – come down to personal choice and preference. Even when 4×12s were pretty much the only option for a touring rock band, there could still be a debate about which speakers to fill them with, what amp to power them with, not to mention the design and make of the surrounding cabinet, the size of the stack, how best to position them on stage, mic them up, and so on. In other words, just having a 4×12 isn’t the only option when searching for great rock tone.

And the advent of impulse responses as an option simply widens the choice into another dimension. While many are seeing the logistical advantages of using 4×12 IRs in live performances – not to mention the consistency in tone they can deliver – there will probably always be musicians who will never say goodbye to their traditional 4×12, because it’s become part of their sound, part of their history and even part of their identity.

At Celestion, we fully expect the 4×12 to retain its aspirational status for diehards and newcomers alike, for a long, long time to come. In the meantime, we’ll continue making 4×12 impulse responses that are indistinguishable from the real thing, offering authentic 4×12 tone to those for whom a physical 4×12 isn’t a practical option.

Authentic 4×12 impulse responses are available to buy and download for all Celestion speaker IRs – browse our range here.