Guitar cab Impulse Responses do a very specific job: they make things sound as though they’re played through cabs and microphones. That’s great, but what do we actually use them for? Here’s five times I’ll fire up the IRs. 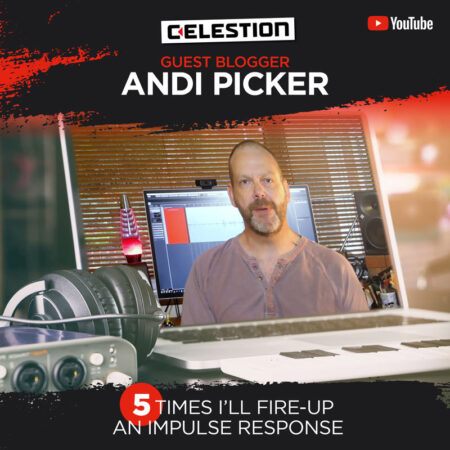 Actual musicians who are making actual recordings on a real-world budget don’t enjoy standing around whilst some engineer spends 40 minutes getting a guitar sound into a microphone – they want to play NOW. I eventually figured that I could let a guitarist dial-in his or her amp, put an SM57 in the edge-of dust-cap/1cm out position and set a level in a perfectly acceptable couple of minutes, then record a DI track from the output of their amp alongside the mic. Load-up a couple of great IRs that match their speaker/cab setup and let the artist make the choice. A lot of those IR recordings make it through to the final mix!

Modern demos need to sound good! I discovered many years ago that I’m really not keen on being hammered by 130 dB of valve amp when I’m trying to fine-tune song parts. To keep things quiet (and latency-free) I’ll track through a small, quiet practice amp just to make some sound in the room (I don’t even put a mic on it) and run a DI from the guitar straight into my audio interface. Sometimes I’ll want to use favourite amps from different software or hardware amp simulators for different flavours of sound, but they still need to “gel” together in the mix. By bypassing the built-in cabs and loading up a couple of Impulse Response mic/room sounds, panned hard left/right, I can use multiple amp simulators with quite different sonic characters, but still get tracks that sound as though they were recorded together in a real space.

Lots of gear I can’t afford.

I first started getting into recording to record electric guitars.  My first few weeks were spent putting a microphone in front of a speaker, recording, then moving the mic a few centimetres and repeating – over and over again. I recorded each mic against the grill-cloth in the centre of a speaker, on the edge of the dust-cap, a couple of centimetres out, a couple more centimetres out, on the edge of the speaker, straight, angled in, angled out, then repeated a couple of cm further out, then 10cm out, 30cm out, 2m out. That’s seventy-five different recordings for each amp sound, for each of the half-dozen mics I had available; and many of the sounds were rubbish! Why did I do it?  Because that’s how you do it “properly”! Why were many of the sounds rubbish? Because that’s just what the mic hears. Eventually I found a few sounds that I use for just about everything. I could have saved days by listening to IRs and then copying their set-ups.

I like my real amps on stage, but sometimes there is just no time, space or energy to fit them in. I’ve played a couple of “amp-rig” in a pedal type units which have been pretty good, but recently heard a MIAB (Marshall In A Box) type of pedal played through a mini IR loader pedal with a Celestion Greenback 4×12 in it. I’m really tempted to build a tiny pedal-board with distortion, delay and IR loader pedals; it’ll weigh a couple of kilos, fit into a gig bag, take two minutes to set-up, and I can give the sound-engineer a lead with a ready-to-go guitar rig on it. Hmm.

There are plenty of other uses for IRs; I’ve used them to create stereo images from single-track parts, to create new and unique sounds from electronic instruments, to add subtle ambience to vocals – and probably a dozen other things that I can’t think of at the moment. If you’ve got something clever that YOU use IRs for, drop me a line at TheDustbowlAudio@gmail.com and I’ll make a list (and see what I can steal).

Watch this video where I explore Impulse Responses in a little more depth and explain exactly what they’re for and when we should use them: