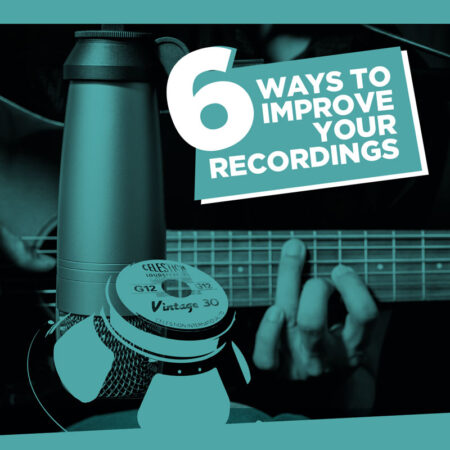 Nearly a year on from the launch of Celestion’s Impulse Response range and the verdict seems to be pretty much unanimous: Celestion IRs deliver accurate, authentic Celestion tone which is virtually indistinguishable from the real thing.

Successfully capturing the tones of our speakers in high quality, digital form is a technical achievement we’re proud of and we love the appreciation we’ve been getting from our customers.

But more and more of our customers – and some of our Partners in Tone – are also telling us about some of the other benefits they’ve been getting from using our IRs. So in this blog we want to focus on one particular benefit: the impact on recording productivity.

We’ve identified no fewer than 6 ways that using a Celestion Impulse Response can help you record more music in less time, and improve the quality of your recordings.

Getting a great tone from your guitar/amp/cabinet combo while you’re actually playing is one thing. Capturing that tone into a recording is quite another.

Your physical setup can sound fantastic to you while you’re playing but slightly (or even completely) different when you play it back. That’s because the tone you hear while you are playing depends on where you are sitting in relation to the speaker cabinet. Sitting directly in front (on axis), or off to the side (off axis) can make a big difference – which is why microphone placement is so important.

On top of that, the tone you hear is also going to be affected by the acoustics of the recording space, whether you’re in your den or a professional studio, as the sound is reflected or absorbed by different surfaces. The recording mic is typically going to pick up much less of that reflected sound as it will (usually) be just a couple of inches from the cabinet. How much reflected sound is picked up by the microphone will vary of course – some are designed to pick up rear reflections, while others are designed to eliminate them.

So it can be frustrating to get down a track which sounded like the perfect take when you were playing it, only to find that the tone on the recorded track doesn’t sound nearly as good. Occasionally you can get lucky and the recording will sound better than it did in the room but this still means that there is an unpredictable “gap” between what you hear during the take and what goes down on the recording – which all makes the whole recording endeavour a bit hit and miss.

Using an impulse response instead of a mic’d speaker cabinet means you can cut out this source of variation and hear what’s actually being recorded. What you hear while you play (especially if you are listening through headphones) is what you’ll hear when you play it back.

Sometimes of course, you might want that extra bit of reflection or room tone to round out the sound. But with IRs you get to control that much more directly, by selecting between (or mixing together) the different mic and mix options available to you with the IR.

Using a Celestion impulse response instead of a mic’d speaker cabinet means you don’t have to worry about picking up unwanted background noise from the environment (traffic, subway, kids etc) that could ruin your recording. It also means there’s no introduction of electrical noise or feedback from your mic, amp or speaker, which might sound raw and interesting on a live performance or when you’re jamming with your friends, but can make a recording sound less than professional.

Cleaner recordings using IRs mean you can put together professional sounding demos easier and quicker without needing to pay for studio time.

When you use IRs you don’t have to spend time mic’ing up a cab and trying different positions, testing, playing back and repositioning. The only setting up you need to do is to choose between the different tone options within the IR files on your DAW or amp simulator.

Even if you’re not sure which microphone or mix option you prefer (you get 18 options plus 8 more mixes to choose from for each speaker cabinet IR) you can test them all fairly quickly by recording one sample and playing that sample back through each of the options. This is a lot quicker than making multiple recordings using different physical setups and then trying to compare them.

And, of course, you don’t have to get the tone completely perfect during setup – you can change it later if you want (more on this below). So perfectionists can relax a little and get on with doing some actual recording.

If you want to record multiple takes to hone your playing, or try out some creative variations, you can – but you won’t need to waste time recording numerous takes trying to get the right tone.

This means you can concentrate on what’s important – the quality of your playing and the composition of the track.

Whether you have a professional studio booked for several days or only get an hour at a time in your bedroom or basement, getting a consistent tone between sessions is a big issue for all recording artists, especially if you want to be able to combine recordings later on in post-production.

Using impulse responses guarantees that the tone you get will be accurate, reliable and consistent, even if your recordings are made on different days or even in different locations. This means no do-overs trying to match the tone you got yesterday (or 3 weeks ago) – which can add up to many hours of time saved.

Once you have all the playing recorded and stored in your DAW or amp simulator, you may have quite a bit of work left to do, especially on tracks involving multiple guitar or other instruments.

For instance, you may have been very happy with the way one guitar part sounded on its own, but when you play it back with another guitar you might decide you need to alter the tone on one or both of them – perhaps to create more contrast between them, or perhaps to make them complement each other better.

Using impulse responses lets you quickly try out different tones on each recording until you find the combination that works.

To demonstrate just how efficient the recording process can be when you use Celestion impulse responses, let’s take a look at a real example.

Pete Thorn recently wrote and recorded one of his recent releases in just 48 hours, using a HeadRush Pedalboard – an amp simulator with a range of pre-installed amps and other digital effects. The HeadRush includes the ability to load in any custom impulse response files that you like and include them in the signal chain to affect the final tone.

Pete had his Pedalboard loaded up with his Celestion IR collection and on his multi-guitar track used both the Creamback G12H-75 2×12 cab and the Creamback G12M-65 4×12 cab. This is a nice way of getting a consistent Creamback tone for the whole track, but introducing some variation between the guitars.

You can hear more about Pete’s working process in this video:

The result – in just 2 days – was Pete’s latest single which has been released on iTunes (there’s a link to that underneath the video for anyone who wants to check that out).

What Pete Thorn’s video shows (apart from his talent, of course) is that a high quality impulse response collection is fast becoming a must-have tool for professional music makers and sound engineers, allowing them to focus on the creative aspects of their craft, and giving them a more efficient way of working.

It’s also becoming a key resource for aspiring professionals too, giving the rest of us the chance to create great quality recordings at home, even with limited time and resources.