In our article Speaker Or Impulse Response: Can You Hear The Difference? we said that, when comparing the output of a Celestion speaker and its IR “…we are hard put to detect which is which, even under optimal listening conditions. For all practical purposes, we find the IRs are indistinguishable from the real thing.”

Of course, sounding the same and being the same are very different, especially when you consider the many different influences on how a sound is perceived by the human ear. So we decided to test the accuracy of our speaker IR range more scientifically – by overlaying the waveforms on the same graph. 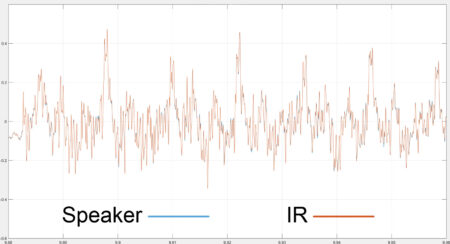 “What blue line?” you may be thinking. Most of the blue line is obscured by the IR signal trace – but you can just make out a few spots of blue on some of the peaks and troughs. This equates to minimal physical difference between the signals produced by the speaker and the IR, which in turn translates to close to zero audible difference.

This sample is just 0.08 seconds long, so this is a really “close up” view of the signal; differences aren’t being hidden by squashing a long period of time onto a small graph.

To help you spot the few differences that there are, we’ve enlarged a section of the graph below – the first 0.01 seconds. 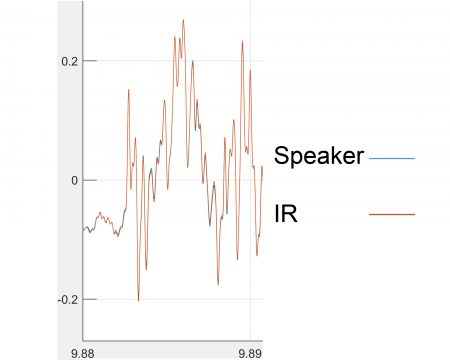 Just for info, here are a few technical details about the conditions under which these signals were created:

So if you’re ready for some truly (i.e. scientifically validated) authentic Creamback tone, head over to the download page now…