By now, a lot of guitar tone enthusiasts will have heard of Celestion impulse responses – virtual guitar cabinets for use when you either can’t make a huge deal of noise or when you don’t want to be employing microphones on a busy stage.

Today, we’re going to explore a third option – let’s say you’ve recorded a real guitar cabinet, but somehow the tone you achieved isn’t quite what you were going for when it comes to the overall mix.

Is it possible to combine the real cabinet recording with one of a Celestion impulse response to get a blend of two different characteristics? Let’s find out… 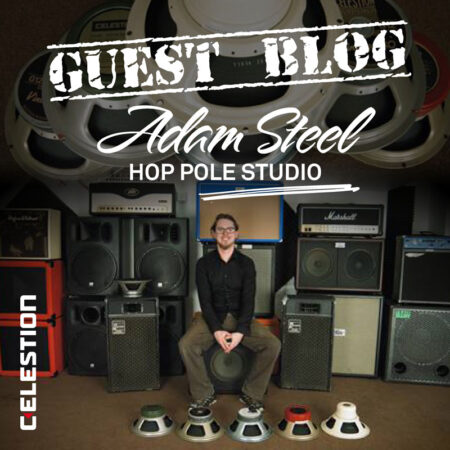 For our example, let’s say that you’ve recorded a rock rhythm guitar using a valve amp and a 4×12 cabinet – this time using a Celestion Vintage 30, with a Shure SM57.

When you were placing the mic during the tracking session, you figured a bright, present sound would be ideal for this song – it is rock and roll, after all! In hindsight, this may not have been the best idea, as there’s a real harshness about the tone – in the mix context, it’s impossible to use EQ to tame it without something sounding horribly wrong. You don’t have the studio or the real cabinet to do any more real sound captures, so what can you do?

As luck would have it, during the tracking, you put a suitable DI box between the valve amp and the cabinet, capturing the sound of the raw guitar amp for future use – just in case. (This is what you would need to complete this funky method, and if you’re into experimentation, capturing different parts of the signal chain can really help with finding different parts of the chain at which to try new techniques!)

If we were to blend the raw amp signal in with the overly-bright amp capture, surely this would sound horrible – like adding in buzzing bees? But if we were to load an IR onto the raw amp sound…

How about a blend? Our amp sound is currently too ‘bright’, but if we were to replace it entirely, we might lose a certain something from our cabinet’s characteristic, especially if we were using a very specific guitar cab to get the tone. In today’s experiment, we’re going to add some ‘dark’ to our brightness, by blending the original amp sound with a CelestionPlus speaker IR.

The Devil’s In The Details

It just so happens that there’s an exact IR ready to fill this purpose – so if we get this loaded up into an IR loader, such as Kazrog’s Recabinet – that should be it, right? Nice and simple? This is where the details can be the make or break, as there’s an extra step involved – and it’s all to do with time and phase.

I know that being all vague about time makes this sound like a Doctor Who episode, so let’s dive a little deeper.

On its own, this is no cause for concern – it’s a delay in the range from a few microseconds to a few milliseconds, depending on how far away the mic is – but as soon as we introduce the Celestion impulse response, there’s a potential issue.

The way that IRs are captured, especially for guitar cabinets, there’s a process involved called Minimum Phase Transform, often shortened to MP Transform. What this does is move the first spike transient of the guitar cabinet right to the very first sample of the IR file, so there’s no delay at all between the sound coming from the amp and the IR producing sound. Why would the designers do this rather than leave the impulse ‘natural’ with the delay like in a real amp?

It would seem the biggest reason for this delay being removed is simplicity and ease of use – if each of the IRs starts at exactly the same time, you could combine two or more of these impulse files without running the risk of them having phase issues between them, which could cause comb filtering, loss of low-end, strange-sounding mids and generally bad tones which are very hard to explain and fix unless you’re acutely aware of this issue – after all, you can’t easily move an IR around like you can push a microphone back by a couple of millimetres as an easy fix…

So, if we’re running a track of ‘real’ cabinet and a track of ‘IR’ cabinet, chances are we will run into this phasing issue, because the IR will start to sound first. As such, we will have to push the timing of the IR back a few samples. How many exactly? Hard to say, because it depends on how far back your microphone was from the real cabinet. 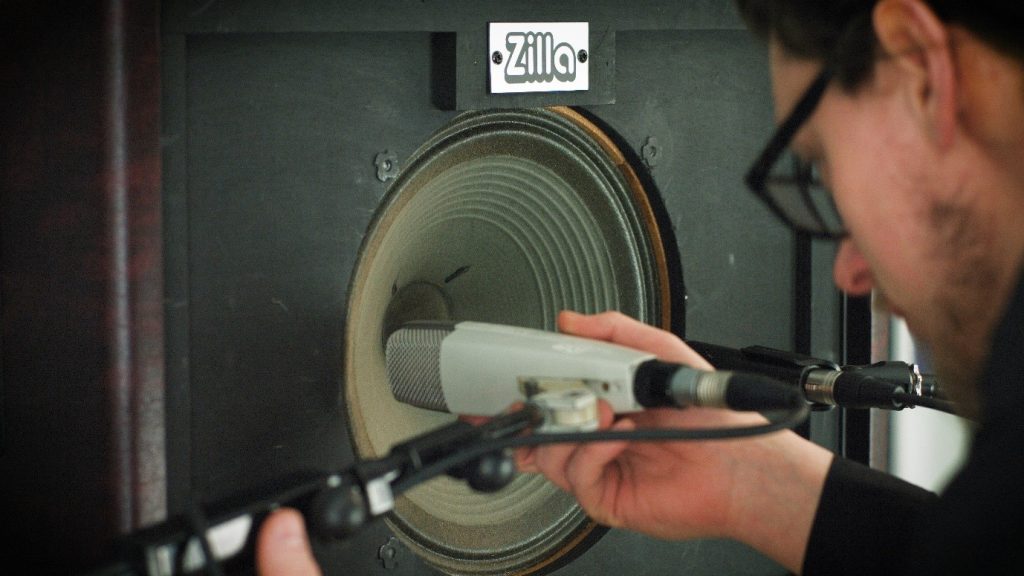 To get the two channels perfectly in phase with each other, there are a few methods you can use. If the DAW you’re using has a ‘nudge’ function, you can select all the raw amp parts of your performance and then nudge them back (to the right) by a certain number of samples or milliseconds.

Alternatively, you can use a delay plugin to achieve the same effect if it has extremely fine controls, and the ability to turn off dry signal, have zero feedback and no filtering involved. 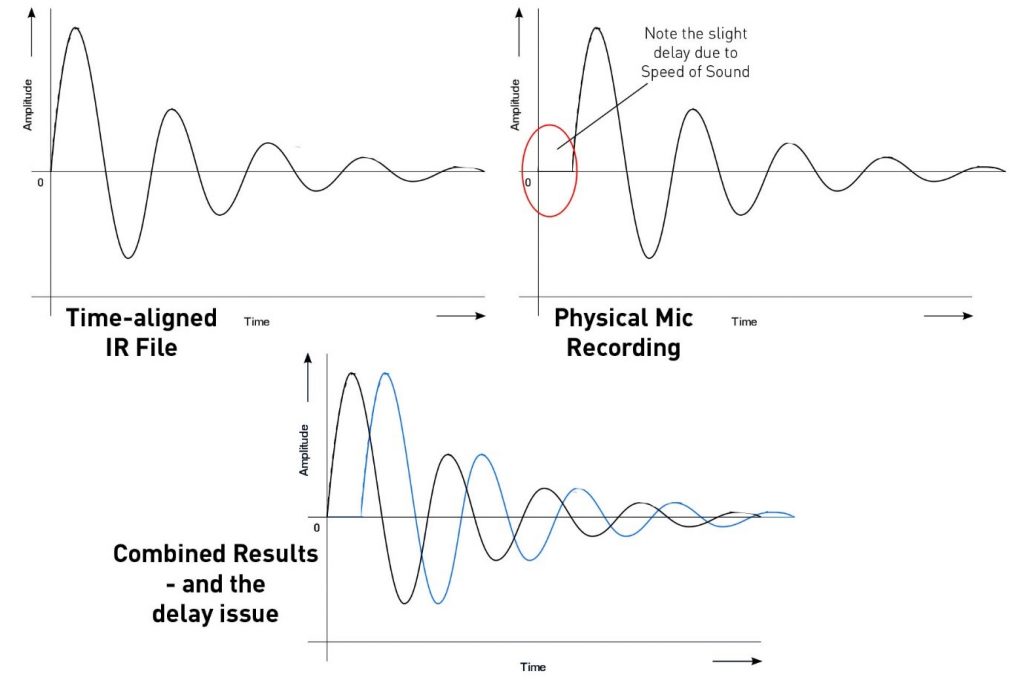 At this point, how can we be sure that the two channels are the best in phase that they can be? There’s a little trial and error involved here, but a way I like to use involved a little detective work. I use the out-of-phase method.

The way to do this is to have a channel strip or other plugin on one of the two channels and flip the polarity by 180 degrees – this usually looks like this: Ø. At this point, the two channels combined should sound fairly awful, with a lot less low end, volume and overall definition. That’s good; that means the two channels are largely out of phase with each other.

What we’re looking for as we push the IR channel’s audio back is for this to get even worse – we want the resulting combo of sounds to be as thin, quiet and generally ‘missing’ as possible – it’s never going to be completely silent (as the two signals are a little different) but at this point, we know the two channels are as out of phase as they’re going to get. Now, un-flip that polarity, and voila! The signal should sound full, present and coherent. They’re about as in-time and in-phase as they’re going to get!

Now that you’ve got the original amp signal and your shiny new IR in phase with each other, you can blend them to taste. If you’re attempting to keep the character of the original signal but augment it with something to balance the tone, perhaps now start by turning the new IR signal all the way off – then slowly raise the level until you find the magical blend you wanted!

Do keep in mind that by adding a second signal to the same guitar part, the overall volume will be louder than it was originally when the two are summed together – if the two are both at full volume, that would result in an overall gain increase of almost 6dB – so I highly recommend sending both signals out to an aux or group of some sort (DAW dependent) and turning the overall level down there to fit this new tone into your mix.

From here, the experimentation is up to you – want to blend in a completely different second speaker? Or perhaps a different cabinet size for its tonal qualities? Or even blend the tone of an open back cabinet with a closed back for the best of both worlds? There are so many possibilities with the range of Celestion impulse responses – let us know how you get on, what results work best for you and the perfect combinations for your next heavy metal mix, or searing mandolin solo. Good luck!