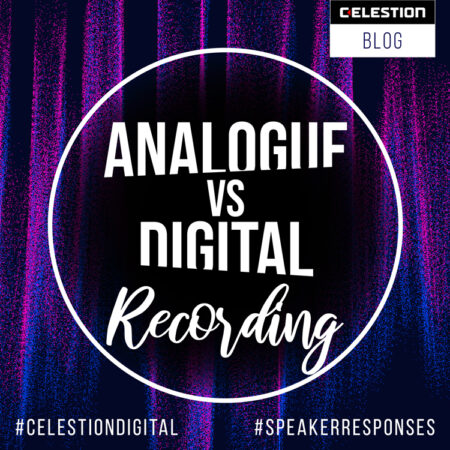 George “G1” Lever is an award-nominated Heavy Metal specialist music producer working out of Somerset in the South-West of England. During a recent conversation about his approach to recording music in the 21st century he spoke of the importance of understanding the basics of old-school analogue audio-engineering to make the most of the modern computer-based studio. That got us thinking about how the technology of making records has evolved in this digital age, and how the fundamental skills of previous decades are still the bedrock of the modern recording process.

Digital technology has revolutionised the way that we capture, effect and store audio: Digital Audio Workstations can give us unlimited track counts, hyper-fine editing capabilities and the endless ability to tweak our mixes without the cost, space, power, and maintenance requirements of a room full of vintage gear and consumable media (those reels of tape are NOT cheap!).

Anyone can put together a home or project studio with a few basic pieces of kit and some software and have access to more tracks and processors than the world-class studios of previous decades had; but for most music we are going to be working at some point with real instruments and voices, moving air and microphones, analogue inputs and voltages – and the rules that made those things work 60 years ago still apply today.

Back in the days when “Analogue Recording” was just called “Recording”, artists and engineers had to know how to produce the sounds that they wanted to hear, then capture those sounds as truthfully and cleanly as possible and store them with the minimum of loss and distortion.

Let’s take a look at what that means:

The source is easy to understand if we think of the thing that produces the sound: do we have the right guitar, is it in tune, does the amp make the sound that we want to hear through the speakers, are the drums properly tuned, does the snare have the right heads, does the bass guitar need round or flat-wound strings, is the singer’s voice in good shape, do we have the right sort of piano… The list can quickly become overwhelming, even before we start to consider if the artists can actually play and sing their parts (there are a lot of studio musicians playing on a lot of “band” recordings out there) and if the music and lyrical arrangements are where we need them to be.

This is all about pre-production and set-up, and it doesn’t matter if we’re recording to tape in Abbey Road Studio One or to a laptop in the spare bedroom, without it the results will not be what we want to hear.

Once the preparation has been done, the music is sorted, the artists are prepped and the sounds are good, we need to record what they produce in as much detail as possible – it doesn’t matter if we’re recording a solo flute or an extreme metal band, the objective is to capture the sound and the emotion of the performance. On one level, this means choosing the best microphones (or DIs) available for the source, putting them in the best place in a good sounding room, setting levels so that the mic-pres are as clean or as distorted as we want them to be, deciding if we want to use EQ/compression/distortion on the live signal or add it afterwards in the mix stage, trimming levels into the recorder or audio interface so that we don’t overload it (unless we deliberately want to), and remembering to push the “record” button. Then getting rid of all the buzzes and crackles that we notice on the recording and doing it again.

It also means helping and encouraging the artists to give the best performance they are capable of – it is way too easy to overlook how stressful performing can be once the tape (or digits) is rolling. It doesn’t get much more analogue than this!

Editing is the process where we take our recordings and trim them to size, select the best parts, remove the bits that we don’t want to hear, move parts for arrangement and timing purposes and generally massage what we have into what we want.

This used to be done by cutting tape with razor blades and sticking it back together with adhesive tape – seriously, don’t bother about the analogue skills here – edit in digital every time. Except – because editing used to be so limited everyone knew that arranging and playing the parts properly was super-important, and no recording ever suffered for being better played instead of being “fixed” later. That said, for some styles of music the virtually impossible-to-play levels of precision required make the editing capabilities of the digital studio an essential part of the performance.

The mixing stage is often done “In the Box” using built-in DAW features and plugins, or with a hybrid approach also interfacing external processors. Some plugins do a relatively simple job – they cleanly compress or EQ or delay or modulate whatever we feed into them. Others might aim to emulate in varying degrees of detail the sound of classic hardware units. Sometimes, those “varying degrees of detail” include how they respond to signal levels, and in these cases it’s good to know how to gain-stage, which simply means how to make sure that the levels into and out of each piece of kit, emulated or real hardware, are optimised. Analogue Engineers had to do this to maintain signal to noise levels and avoid unwanted distortion; many software processors are very forgiving of levels, but some are not, and it’s a lot easier to judge mix decisions if levels are well-behaved.

Real mastering is the part of the process where the stuff that gets delivered is made – this used to be analogue media such as vinyl and tapes or digital media like CDs and DVD/Blu-ray. Today we tend to think of mastering as being the stage where final EQ and dynamics processing is applied and levels are set for streaming or physical media, hopefully by someone who really knows what they are doing. If songs are being released as a physical collection, then they will be put in order, gapped and balanced to make sure they work together as an album. It’s easy to get caught-up with all the “Mastering” processors that money can buy, but almost all of this work is about a combination of listening skills and understanding the technical requirements of the delivery mechanism – just as it always was.

Making records is a complex balance of art and technology.

Many of the work habits and skills from the analogue world are still as relevant in the digital studio as they ever were, but the possibilities are so much wider: we can blend the analogue and digital worlds  to make our situation work – a drummer in a room or a grid full of programmed MIDI feeding a virtual instrument, a screaming guitar stack or an amp feeding a reactive-load into a software cab sim, $50K of Fairchild compressors or a plugin – and all points in between; it’s all about getting the right technology doing the right job, and if it gets the job done then it’s good technology!

Digital recording allows us the flexibility to record a hundred different takes of a hundred different parts and to make decisions about what they will sound like later. This can be a great time saver in the studio, but someone who may never have heard the artist perform the piece will have to make those decisions at some point, and the further that step is from the actual recording process the less likely it is to reflect the emotion and the power of the moment.

Analogue limitations force decisions to be made, often to the benefit of the recording; and sometimes working as though those same limits existed, even in a digital environment, can drive a session to a better result.

It’s great to have a dozen different compressors to choose from, but if we don’t know if we need 3dB or 30dB of gain reduction it really isn’t likely to matter too much which one we choose – if we had just one compressor, we would learn everything that it could do and produce better records for having that skill. We may have only a couple of real amps and cabs, but they are OUR amps and cabs and they don’t sound quite like anyone else’s (unlike the “Metal Guitar 1” preset that may, or may not, find its way onto just about every metal record of the moment).

New gear can both hinder and inspire us – it’s horribly easy to spend a day playing with a new set of sounds and get no actual work done, but sometimes a new tool makes it quicker and easier to get the results we’re chasing – and those are the tools that are worth the time and money to ease into the workflow.

It’s easy to view the past through rose-tinted lenses and to believe that everything was somehow better then; it’s also easy to view the present as an unlimited creative canvas. As with most things, the truth lies somewhere in the mid-ground.

As George himself commented:

“I think the film industry was a really good precursor of what can happen to an artistic outlet when you go from a traditional method to a new version which is then refined. I don’t know if you remember in the late 2000’s where everything had CGI in it, but it wasn’t really that comfortable to watch…. Now we are entering this realm of filmmaking where CGI and filming are being used side-by-side, and filmmakers are becoming better in the live-action department because of the mistakes and limitations of the early days of CGI. It’s a cyclical re-informing process, and I think within the music world we have seen this huge shift towards doing things in a digital realm, the thing that limits your creativity is when you are staying completely within the computer and you’re not committing to stuff, your computer & hardware setup determines absolutely everything that you are capable of achieving and how far that can then go.

I would say mine is a hybrid setup. I learnt that there are things that are simply easier to do by hand, in real life, with things that exist rather than trying to manufacture it. When you’re stabbing in the dark at what a synth sound could be or what a drum sound could be, having a point of reference makes life a lot easier, and then you understand your real-world limitations, then that’s when you escape from this sort of “Uncanny Valley” type situation where something sounds like what it could sound like, but it’s been egged-on too far, or it’s just a bit uncomfortable to listen to. So, with my process, everything I do re-informs where I start at the beginning of a session or project, working with other people, and then that informs my decision-making as to whether I’m starting it in the real world or if I’m starting it in the digital world. “

Ultimately, all recorded music starts and ends as an emotional interpretation of the artists’ creativity, and whatever we add into the process is just a set of tools to help us realise that.  Use the best of what works.

Check out our blog to read more of our latest news & articles all about music gear and the latest Celestion products!