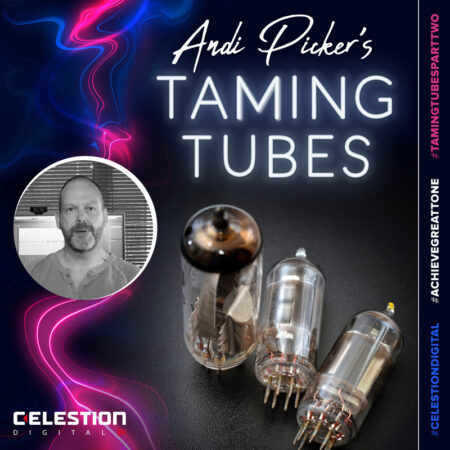 UPDATE: Video Two is now available, click here to watch. In Part 2 of Andi Picker’s ‘Taming Tubes’ video series, Andi runs through some techniques and bits of gear you can use to get the most out of your tube amp’s sound at any volume. Hotone’s Ampero II Stomp in particular is on full display as part of Andi’s ‘Taming Tubes’ setup. The 20 authentic Celestion IRs included with the product is just the cherry on top of this great bit of kit which, as Andi mentions, is quickly becoming an essential part of his everyday life.

In this article and trilogy of videos, guest writer Andi Picker describes his guitar-gear journey over the years and the challenges of trying to balance loudness with a great sound. From traditional tube amplifiers to new, digital options like the Hotone Ampero II Stomp, Andi demonstrates some options (both traditional, digital and hybrid) when it comes to achieving a guitar sound that is great at all volumes.

I remember my first gig: a support set at the legendary Brentford Red Lion in West London. We had two guitar players, Seb, who could really shred …. and me. Both of us played Marshalls, and in the excitement of the moment they both got turned-up “just a little bit more” – after the sound-check and before the opening number. Halfway through the first song my ears broke, they just gave-up, and I spent the rest of the set, the evening, and most of the following day hearing the world as though my head was buried in a bucket of water. The amps sounded glorious though. I imagine.

Those were the good old days; no environmental monitoring, no health and safety, no earplugs, no complaints if the bloke in the front row suffered brain damage from sticking his head right up against the PA all night – if it was too loud, you were too old!

I still have that Marshall, I still gig it, and it still sounds great, but I play my 20W Victory amp a whole lot more because I can use it without breaking the sound barrier – the one created by family, neighbours, band members and front-of-house engineers who have-to keep things quiet because someone bought an apartment next door to a music club and then complained about the noise.

In the end, too loud is too loud; it damages ears and relationships, makes it hard to work, and it even messes up the sound for the audience. But some amps sound good only when we turn them up. What to do?

I’m putting together a short series of videos dipping into precisely that “What to do?”.

Tube Taming 1: Why is my amp too loud, and what can I do about it?

This episode looks at the features of amps and the gear that we use around them that can help us to navigate the tightrope of sound vs loudness – what do Master Volume controls do, features that can help us to tame a loud amp, understanding what power ratings mean, how much speaker choice matters, and some simple tools and options to help-along an old, or new, favourite amp.

Video two will explore ways to combine my old-school Suhr Reactive Load (bought a week before the new IR model was announced) and even older-school THD Hot Plate attenuator with a couple of pieces of new-school kit to get the same functionality as some of the premier amp-aid devices that are being produced today, without having to keep re-buying expensive components.

The final video in the trilogy will expand the horizons a bit and take a look at a digital alternative/addition to the tube amp – I’ve been firmly analogue forever – the only digits in my rig have been fingers, but just recently I plugged into a Hotone Ampero II digital modeller and it’s getting a whole lot more use than I’d have ever expected, both alongside and, occasionally, instead of a real amp.

There’s something wonderfully pure about a simple valve amp circuit turned-up to overload and allowed to sing, and amps that were unusable dinosaurs a few years ago are now practical in more ways than ever; by understanding a little bit about how they work and what we can use to help them along the way we can make better choices about where to spend our money, get the best use out of what we buy/beg/steal* or borrow and fill-in the gaps when we need a little something extra.

Check out the videos below:

When it comes to guitar gear, I’m pretty much the original “Analogue Man”. Sure, I have a few digital tools for specific purposes, but I’ve never been interested in the ongoing ‘Battle of the Modellers’ as all-in-one solutions. I originally grabbed the Ampero II Stomp to use as a cost-effective digital toolbox, for the virtual speaker cab with the built-in Celestion Digital IRs and the studio reverbs and delays, then found that I can model my entire rig with the specific pedals I have on my real-life board, that it’s a lot easier to carry to rehearsals than that pedal board, and it provides a backup amp.  And a looper. And has a headphone socket. And an 8 in 8 out USB interface.  For someone who thinks that three knobs and a switch on a pedal is generally going a bit too far, it’s been remarkably easy to set-up (I haven’t even looked at the manual) and sounds (and looks) fantastic. I won’t even mention the guilty pleasure of having 87 different amp models to play with when no-one’s looking!

As the world crashes into yet another round of valve shortages and associated steep price increases, this white box has moved onto my desk as both digital lab and practice rig and is starting to look like both the ultimate tube-saver and the bargain of the year.

For more information, find out more about Hotone Audio and the Ampero II Stomp, which incorporates 20 authentic Celestion IRs.