Drew Foppe is a guitar, bass and amp tech who has spent the best part of the last 20 years touring and working closely with some of the biggest names in music, including The Smashing Pumpkins, Slipknot, Faith No More, Fleetwood Mac, Shakira and Sheryl Crow. When he’s not on tour or in the studio, Drew’s working on designing and building high-quality amps and cabs in small batches under his Foppstar Amplification brand.

We caught up with Drew to discuss the role Impulse Responses play in the music industry today and how today’s technologies influence both recording in the studio and playing live on stage.

You’ve worked with many high-profile bands, including, most-notably, The Smashing Pumpkins. Tell us about your role as a guitar and amp tech and how you think technology has changed things over the years?

Over the past several years, I’ve worked closely with Shakira, Sheryl Crow, Deftones and The Smashing Pumpkins. I also spent almost a decade working for Fleetwood Mac as a guitar and amp tech.

I love my job because I get to work with all types of gear and musicians; from vintage guitars and amps that need constant, regular maintenance to keep them working, to working closely with the newest technology companies and gear manufacturers. Never a dull moment for sure! I always have to learn new things to stay ahead of the curve and be familiar with virtually every new piece as it is released. I really enjoy getting to beta test products from time to time for companies in real-life situations on tour. It helps everyone learn what works and doesn’t for musicians in the long run.

No one artist is the same and that is what makes my job fun. I like to work closely together with every artist to create a very trusting and co-dependent relationship where they know I always have their best interest in mind, and I will do everything possible to help them on their journey for their perfect tone.

How much of your job involves trying to achieve the right tone for your guitarist(s)?

As a guitar tech, my role is to ultimately help every artist achieve the overall sound, specific tones and feel they are searching for at any given moment. Sometimes guitarists I’ve worked for already have everything they want to use and are completely stuck in their ways regarding what gear they will and will not use. Nothing is open for discussion with them, and that’s completely fine and I respect that.

Other guitarists come to me with no clue where to even start and we work together to find the perfect gear that is needed for a specific song, recreating a previous album or building a full rig from the ground up for a touring scenario.

There are also guitarists out there who are already happy with all the gear they currently have; however, they also understand there may be new pieces of gear out there they are unaware of and are often willing to try out in order to make them ultimately sound better.

Even if a guitarist is completely set in his/her way with gear, I feel it is part of my job to at least present a new piece of gear to them with no expectations. This is especially true in circumstances where the newer gear will sound better, have a lower noise floor, possibly have a smaller footprint on a pedalboard/rack or if it will do the same thing as what they already have, but better.

Over the years, I’ve found that most guitarists understand there are newer and/or better technologies out there. Some are more inclined to embrace these new technologies, while others can be more hesitant.

Ultimately, a guitarist’s tone can be an extremely personal and specific journey. From pick size/material, type of strings, pickups, speakers, guitars and amps or digital gear and IRs – everything involved determines the final result and I am always happy to help musicians on that journey.

Before Impulse Responses came along, what were your main tools for controlling guitar tone?

Impulse responses have literally changed the music industry. Certain things that are possible now, have never been possible in the past. Bands who have always had their amps so loud they were about to blow up every show, can now be completely silent on stage and wear in-ear monitors which help isolate everything and they can hear things they’ve never heard before… for better or worse in most cases – haha!

Before IRs, everything had to be mic’d on or under the stage. Often, trying to isolate guitar cabinets’ mics from the drums/cymbals bleeding in and trying to stop guitar cabinets from bleeding into other mics on stage would be a real issue. In fact, it still is from time to time.

When this would become a major issue, I always suggested that bands use ISO cabinets. In most cases, you would have a single speaker or 4×12 cabinet in a sound road case all mic’d up that is isolated from everything else on stage. Rivera Amps make the best 1×12 ISO cabinet, called the Silent Sister. (I used these ISO cabs on tour with Slipknot). This really helps control what is picked up through the guitar mics and what can and can’t bleed into others.

You were an early adopter of IR technology and have written at length comparing the Axe FX 2 to the Kemper Profiler – how do Celestion IRs compare to products you have previously used? 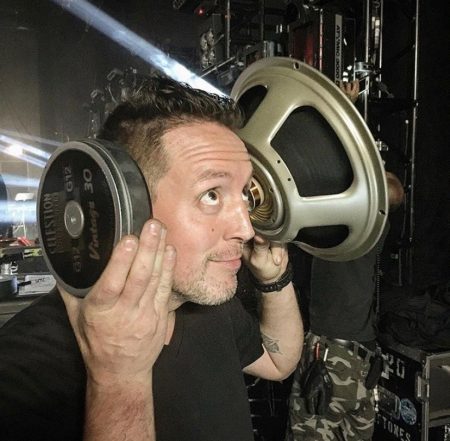 I was using IR technologies fairly soon after they were introduced. My first experience with them came from using the Fractal Axe FX. When the Axe FX came out, it was like nothing before. It gave musicians the ability to take an entire guitar rig (amps, cabinets and effects) and carry it in a backpack. The technology was amazing. Since then, I have continued to work with Fractal, Kemper and Line 6 as they are constantly updating their technologies and releasing new products.

By implementing IRs these days, guitarists can now use their favorite cabinets, speakers and mic combinations on a variety of multiple platforms they had never been able to do before. You can record a dry track for an album, then re-amp the track through multiple different IRs and digital amps with amazing results. To do the same thing in the past, you would need to physically own every cabinet, speaker and microphone and have a place large enough to store everything when you’re not using them.

With IRs, I can send an email or use a USB drive to transfer an entire guitar rig, complete with IRs from my home to any studio or musician around the world in seconds. That alone is one of the most incredible things IRs have accomplished for the music industry.

How much of The Smashing Pumpkins’ work (composing, recording, mixing, playing live) is done digitally these days and what type of kit is used?

The digital gear being made today is in a completely different stratosphere than it was just a few years prior. More bands are becoming more open to the idea of digital gear for the flexibility, tonal options and the ability to create and do things they’ve never been able to do before due to the inherent limitations of all analogue gear.

Check out Part 2 of the interview here!