Guest blogger Andi Picker lets us into his world as a guitar tech and explains how the benefits of Celestion IRs became apparent.

A few weeks ago I was sitting in my studio staring at yet another screenful of drum edits and slowly losing the will to live. Suddenly (thankfully) my phone buzzed and my mate Rich asked me if I’d be able to help out a guitarist he knows who needed a tech for a one-off gig. This guitar player is a genuine old-school rock legend and images of his trademark off-white Les Paul have been seared on my memory for many years. So… 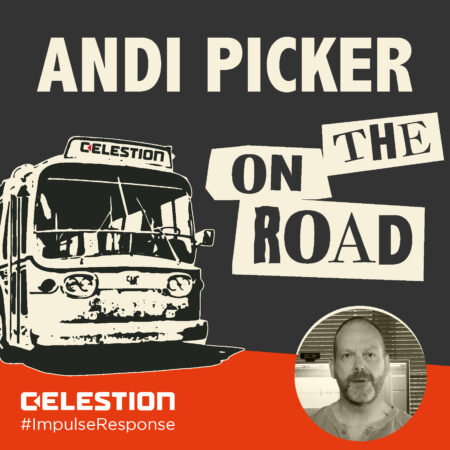 I’m always happy to grab an excuse to get out of the studio for a while, so I shouted, “Yes!” several times just to make sure he heard me! The band was appearing at a small festival that started on Friday evening and ran through to Saturday night when they were scheduled to play third on the bill.

These small festivals are interesting affairs; they typically take place over a couple of days at locations like holiday camps, with both new and established bands playing real, live, original music to crowds who love what they do.

On this occasion, the bands were playing in a ballroom with a stage at one end, with a pair of really good monitor and front-of-house engineers to take care of the on-stage and audience sound, and with each band providing its own crew to set up amps, cabs, drums and so on.

I arrived early on Saturday, met the band and sat in on an amazing acoustic rehearsal session, then checked out the gear I’d be looking after and took a look at the stage set-up. The atmosphere was brilliant; all of the bands and crews were helpful and friendly and the promoters had provided some big chaps to help us to move the kit around.

What there wasn’t was a lot of space on the stage, and with tight turn-around times between the acts to keep the show flowing for the fans, that meant a lot of gear had to be carried onto the stage and set-up in not very much time. The headliners had their drums on the riser at the back of the stage and then everyone else either set-up in front, so that the available space got smaller for the bands further down the bill, or else prepped their gear off-stage and then had to carry it on and plug everything in during the 15-20 minutes between sets. Easy!

OK, remember I said that my guy is an old-school legend? Well, in this case, ‘old-school’ means a pair of Celestion-loaded Marshall 4×12 cabs, a Marshall 100W head as a main amp, a 50W head as a spare, a pedalboard, and a bunch of leads to hook it all together and get power to where it needs to be.

Remember I said there was a 15-20 minute interval between sets? Well, the previous band has to get their gear taken apart and off stage in that time, using the same bit of floor space and the same set of backstage steps that I’m trying to use, and by the time my two cabs are spread-out stage-left, there’s even less space to move people and stuff and things!

I got the cabs set up next to each other, apologised to the sound guy after I knocked over half of the drum kit mics, and then got in his way again as he replaced them; 100W head on top of one cab and plugged into both (double-check the impedance), spare 50-Watter on the other cab, mains power to both amps, pedal board plugged in and powered, mic on one of the speakers, main guitar tuned, apologised to the sound guy after demolishing the kit mics (again), test the rig, get sound, bit of knob twiddling, get out of the way so the sound engineer can adjust the guitar mic, then spend the whole show tuning and swapping guitars whilst the guy up front makes it look oh-so-easy (amazing what 100,000 hours of practice does for a player!).

That Marshall set-up sounded and felt like thunder from the back of the stage – there really is nothing like big valve amps pushing big cabs and moving big air to make the point that this is ROCKANDROLL!!!

Show over, guitars into cases (always protect the guitars), unplug everything, fight the next band for stage and step space to get out of their way, lug everything aside, inventory check, pack into flight cases and load everything into the van. Then it’s time to grab a beer and catch the main act from out front and hope that the people who had to buy tickets notice my Access All Areas pass and realise how important I might be!

Funny thing; the guy doing my job for the headline act carried a small box to the front of the stage, plugged it in, handed a cable to the sound guy and then disappeared. It took him about two minutes! The band played a great show and sounded awesome.

Afterwards, using the power of the AAA pass, I headed backstage again and asked their tech what they were using. He was already packed up and drinking coffee so was happy to take a few minutes to have a chat.

The rig was an amp sim pedal and an IR loader with the exact same Celestion speakers that I’d just been tripping over, and the whole thing weighed about 1.5kg and fitted into a shoulder bag. The ‘amp’ sounds the same every gig, the cabs always have the perfect mic in the perfect place, the audience hears the guitars mixed through the PA, the band members hear exactly what they want to hear through their on-stage monitors or in-ears, and the tech relaxes and tunes a few guitars!

I love tube amps and speaker cabs – I feel a sort of emotional connection with them, and I use the real stuff every time I play a gig. But if I was building a rig that I had to transport and make work and sound great night after night, indoors, outdoors, headline, support, big, small, loud, quiet, with minimum stress and strain, I’d probably have to think very hard about the balance of 80kg and £1,000 worth of cabs (plus flight cases) vs a weightless IR loaded onto a compact pedal.

Perfectly recreate the tone you love anytime, anywhere – whether that’s at home, in the studio or live on stage.