Of course, you know Celestion’s official story about how we created our incredibly accurate impulse response files: with a world class recording studio, professional quality microphones, hand-built cabinets, years of research and development and the expert skill of award-winning sound engineers.

But is that really the whole story? Can all this investment of time, skill and resources really explain the level of authenticity that Celestion have achieved with their range of impulse responses? After all, many others have tried – and failed – to reproduce faithful IRs of Celestion’s classic guitar speakers. 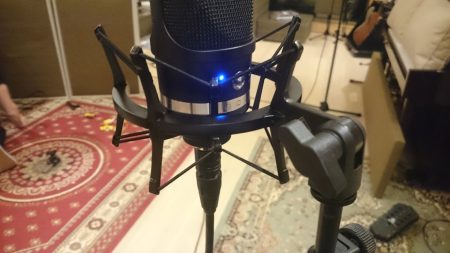 As happy as our customers have been to enjoy lifelike Celestion tone at the touch of a button, some have found the official story just a bit too easy. Surely there is something else to it… some equipment or technique we just weren’t telling people about?

In this behind-the-scenes shot from a Celestion impulse response recording session, we can clearly see not only a state-of-the-art room mic (a Neumann TLM 107) and a sound engineer at work, but two strategically placed oriental rugs.

Could this be the secret that Celestion have managed to keep under wraps for over two years? And are oriental rugs in recording studios really a thing… ?

Rugs in Recording Studios – Is That a Thing?

Well, yes… rugs (especially Persian and Oriental ones) in recording studios is most definitely a ‘thing’! Just check out this board on Pinterest if you want to see what we’re talking about.

But are rugs in studios just a fashion statement, or can they actually help recordings sound better? And what role did rugs play in the engineering of Celestion impulse responses?

A recording studio with only hard surfaces (e.g. wooden floor, plaster ceiling and walls) would result in sound waves bouncing around the room and the microphones picking up all kinds of uncontrolled reflections.

But if you want to control the sound reflections in a studio, why choose a rug rather than, say, wall to wall carpet, or foam panels attached to the walls or ceiling? Wall-to-wall carpet would deaden the sound completely, losing all the brightness and chime you want at the higher end and producing a very flat and muddy effect.

Foam or fibreglass panels fixed to the walls can be effective, but if they are fixed, you’re stuck with whatever acoustics they produce. And, like wall-to-wall carpet, they can deaden the space if there are too many. Once you’ve deadened the sound with wall-to-wall carpet or foam panels, you can’t easily brighten it again to where you want it to be.

So, it’s better to start with a studio where most of the surfaces are hard, and strategically add in absorbing materials until you get the effect you want. Multiple rugs of different sizes let you progressively add sound absorption to the space. 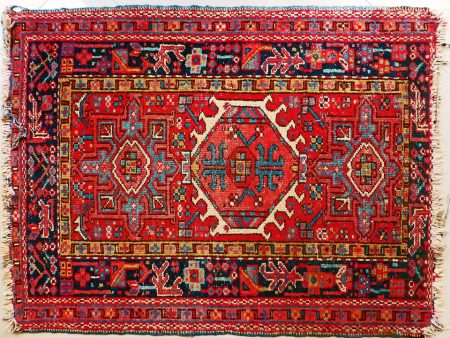 A further advantage of using rugs is the ability to place them precisely where you need them, as rugs are generally light and portable – compared to speaker cabinets at least! The purpose of a rug is to handle localised sound reflections, so positioning is important in relation to other hard surfaces. They are frequently placed underneath a microphone (with the mic raised onto a stand) to prevent ‘floor bounce’ – this controls the sound going into the underside of the microphone but without affecting the acoustics of the rest of the space too much. Part of the studio setup will often involve moving the mic around to achieve the best tone – so you need to be able to move the rug around with it.

The need to stand equipment on top of a rug highlights another feature of Oriental floor rugs – their flatness. A thick, deep pile rug might be good for sound absorption, but will make an unsteady surface for equipment (especially tall microphone stands) and will allow unwanted movement and vibration. An Oriental rug is very tightly and evenly woven, resulting in a flat, stable surface.

So, while Oriental rugs may seem like a rather low-tech feature of the recording environment to the untrained eye, they provide a highly absorbent solution which is also light, easy to move around and stable, giving sound engineers a high level of control over the behaviour of sound waves in a recording space. And it is this level of attention to detail which has enabled Celestion to produce highly accurate IRs of our range of classic guitar speakers.