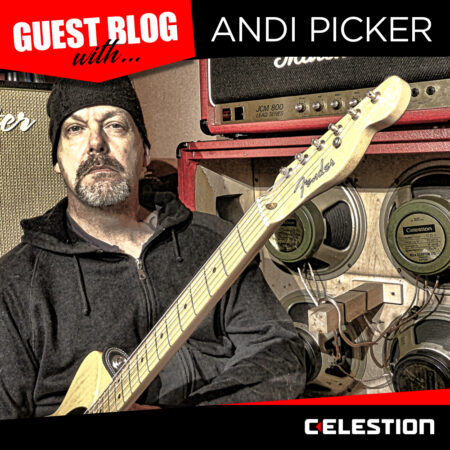 In our latest blog, Andi Picker describes his gear set up and how combining old and new speaker technologies can bring the best of both worlds – when playing live and in the studio.

A couple of weeks ago the drummer of a band that I play with accused me of being old fashioned about gear. A man who makes music by hitting things with sticks called me, a guitarist with a stage full of stuff that needs to be plugged-in, “Old Fashioned”! Oddly-enough, he’s slightly right – but also massively wrong!

My stage gear is based around guitars designed in the 1950s, amps from the 1960s, and the technology in my most modern pedal goes back to about 1977.

When I started gigging, clubs were smoky, sweaty and loud, and most of our guitar sound came from stacks of cabinets full of Greenbacks that we simply turned up until we were louder than the drummer – and then a bit more. The sound engineer tried to make the singer be heard and no-one complained (or at least if they did, no one could hear them).

I Suppose We Have to be Reasonable…

Today those clubs have SPL meters that measure how loud everything is, because they have neighbours who have learned that they can complain about noise, and employees who want to have working ears when they go home. On top of that the “mini-festival” format for live music has been exploding with a half dozen or so bands playing short to medium length sets in smaller venues with packed back/side stage areas and super- short change-over times.

As much as I love my big boxes of speakers I also love not having to carry them and find places to put them, and with just a bit of careful planning my old-world gear can work very well with a little bit of the 21st century.

Sure, for a main set on a decent sized stage I still prefer to use big cabs that move enough air to make my trouser legs flap, but when time and space are tight I’m happy to plug my old-school amp into a reactive load-box and a new-fangled Impulse Response loader pedal with a selection of my favourite Celestion speakers and just let the front-of-house engineer build the sound from there. More time and space for everyone, happy stage crew, happy sound engineer – happy person who books the bands!

Rig in a Bag

I actually recently did a rehearsal with an amp sim pedal and an IR loader that I plugged directly into the PA system; it sounded  good enough that the band didn’t notice that I wasn’t carrying an amp and cab until the end of the session when I was packed-up and out of the door ahead of the singer (and I didn’t have to help the drummer to pack-up his old-fashioned gear into his old-fashioned car!). Great backup gig-rig too.

If I don’t want to rely on a PA system or if I want to hear my guitar sound coming from where I’m used to having it – behind me – I can use a hybrid approach with a small and lightweight powered cabinet with a Celestion F12-X200 full-range speaker to amplify my “smoking amp into big-cab IR speakers” sound to any level that suits the venue, and somehow it still manages to feel like a proper guitar cab (I believe they also sound good with real guitar amps, but I’ve never tried that).

It’s not just live music where the decades are meeting; I’ve just been mixing a song where the bass was recorded with a DI box, the main rhythm guitars used real valve-amps into a reactive-load with Celestion Digital Suhr and Orange cab IRs from the Backline Heroes collections applied in Cubase Pro, the second rhythm part was an amp into my vintage (yes, the mid 1970s IS now vintage) Blackback/Greenback loaded 4×12 with an SM57, and the lead parts were DI’d into a Positive Grid Bias amp sim with an included Celestion V30 IR . Once the song is mixed no one cares how the parts were recorded so long as they sound good, and it’s a lot easier to track in a small studio without having to work-around 130dB of Marshall 4×12!

There are times when I do miss the simplicity of the good-old days when it was all about real hardware or it didn’t happen, but newer technology like amp sims and IRs and full-range speakers don’t have to take anything away from the old gear; that all still works, and the new gear just adds options to get the job done as quickly and easily as possible – which is never going to hurt when you’re chasing the next piece of work .

Celestion is constantly evolving its speaker technology to meet the changing needs of the industry. Whether you want to streamline your gear at live venues, or experiment with different speaker configurations more easily, our impulse responses can help you do that.

In 2019 we launched the F12X-200 speaker, to provide guitarists around the world the ability to reproduce the full spectrum of audible frequencies for the most accurate output possible, whatever environment and set-up they might be emulating. It can be used anywhere you are using a modelling amp with Impulse Responses – in a backline cab or a monitor wedge on stage at home or in the studio.

But it’s not all about moving towards digital. Playing guitar will always involve a strong physical element and it’s about finding the right balance and synthesis between old and new, to get the best of both worlds in terms of tone, performance and productivity.

Our mission at Celestion is to help every guitarist create the best sounding music they can, whether it’s using traditional speaker cabinets, digital impulse responses or a hybrid combination of the two.

Click here to browse our range of Impulse Response Downloads