For our latest Celestion Digital interview, we caught up with our good friend Guillaume Pille, founder of Two notes Audio Engineering. Marking around four years since the launch of Celestion’s Two notes DynIRs, we checked in with Guillaume to see what’s new with Two notes, what’s on the horizon and his thoughts on the current landscape of music making and music tech.

So, it’s been roughly four years since we launched the Two notes DynIRs! How have things been going for you generally with the business?

Covid times were a bit weird, but now we’re significantly bigger than we were four years ago. What really changed things is when we started releasing the hardware units that drive our business. We released a unit called the Captor X in 2020 – right when we had the first lockdown – that changed a lot of things for us; it was the first – let’s say – global success we had with a unit that was priced towards not only the professional sector.

During this period, a lot of new customers were locked in their homes, seeking a solution for simplified home recording. Needless to say, we delivered the right product for those guitarists who wanted to use this time productively.

So it was perfect timing!

Yeah, it was a pretty bad time for many people and we couldn’t really predict what was going to happen; but we had a really good reception from the public, so it really put us on the map for guitarists. Our brand equity increased a lot during that period, much like other brands who also released the right products at that time.

Since we started working with Celestion four years ago and launched your DynIRs in Two notes proprietary format, we have continued developing our product range to offer more affordable products to reach a lot more people. On the software side of things, we have significantly increased the library of what we call DynIRs (the virtual cabinets that we sell) and have recently been working with a lot of different artists to create bundles, some of which are real hidden gems.

Our customers gravitate towards these releases; the latest Artist Series release was with Steve Stevens, where he brought 5 cabinets out of retirement that he’d had since the first Billy Idol album and the Top Gun soundtrack; finding and capturing these super rare cabinets is just one of the angles we’ve pursued for our virtual cabinets library, which has proved immensely successful.

The other benefit of these releases is that it helps our users quickly recreate their favorite artists’ tone, without the effort of working out what gear they used, or modeling solutions. They can just buy the bundle and have the tone they’re seeking from the get-go!

In short, these Artist Series DynIR bundles get them to where they want to be much faster. People don’t necessarily know what equipment Jimi Hendrix had in the studio in the 60’s, but if you tell your customers, “Here’s a list of all the things he had, and this collection models all of that gear” everybody wins. 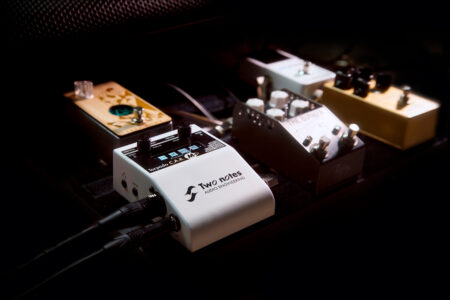 You’re educating them and helping them to make their life easier! That sounds like a winning combination!

Absolutely. But that’s just one of the angles we’ve employed in tackling the modeling market – and we didn’t invent the idea! Many brands are now associating themselves with artists so that they can communicate releases together, including Celestion of course.

So, have you got any new products in the pipeline?

We’re releasing a new product family in Autumn 2022 that was first launched at NAMM in June; namely the ReVolt Series all-analogue amp simulators. At their core, they’re 3-channel amp modelers, available in both guitar and bass versions in which Two notes have replicated the sound of some truly iconic amps. On ReVolt Guitar you have a Fender® Bassman 100, a Marshall® JMP Superlead and a Soldano® SLO 100 – It’s based on some of the amps in my collection, actually! On ReVolt Bass we have an Ampeg® SVT ‘76, a Marshall® 1992 JMP Super Bass Mark II, and a custom proprietary high gain bass amp best thought of as a full-featured, highly-distorted, modern channel.

We had a lot of interest and press articles written about them. I was actually surprised, because it’s not a major product release for us, even if it’s the only piece of hardware we’re slated to release this year. The ReVolt Series is much more of a transitional product for us.

In that case, tell me a little bit about the history of how the ReVolt came to life.

Until the tail end of last year, we had four tube preamps (LE-Series) in our product catalog; we decided to stop selling them as they were, and redesign them. There were three guitar preamps and one bass preamp; we built upon all the good stuff from the three guitar preamps and condensed these into one box; we expanded the bass preamp a bit for the ReVolt Bass, as previously the LE-Series bass preamp was only 2-channel. I still wanted to have a pure, analog solution for people who wanted to go direct to front-of-house or for recording – and, of course, just playing with headphones. It’s 100% analog; there’s nothing digital in it, no Torpedo processing, no nothing. This is important as some of our customers buy our analog loadboxes and they do not want to mess with any digital technology. 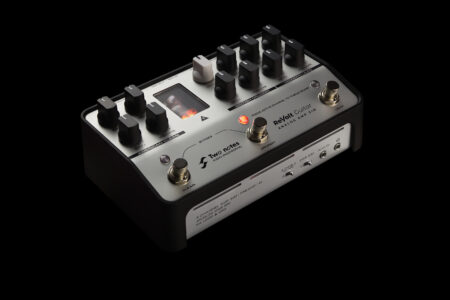 What do you think is the percentage of your customers that are absolutely no digital whatsoever?

It’s hard to tell, because the 100% analog devices we have can be used with a computer or other digital devices.

Intuitively, I would say probably 10-15% are hardcore analog-only. It’s also important to note that the ReVolt Series certainly appeals to a different audience than the Torpedo products, which are predominantly directed towards amp owners. With the ReVolt Series, you can just be a guitarist with no amp collection.

So… just plug and play?

Exactly, you just need a compact solution and that’s what we provide. We tried to go a little bit out of our usual customer base. The thing is, it’s totally possible to take that analog unit and plug it into a computer and use our DynIR technology, because with all our analog devices we provide a software plugin that people can use; so if they want to record or even play live, they can do it all within our hardware/software ecosystem.

Certainly for a significant portion of customers; for probably 90% of the market, having something that sounds great is enough. The vast majority of people just need something that works as well as possible, but still remains practical. The guitar market, since probably the end of the 90’s, has been trying to find the smallest, most compact solution for the musician who just wants to go and gig with their friends and take the metro or a cab; they don’t want to (or can’t) carry around an amp and everything else.

It just makes life so much easier – the setup is quicker, and you don’t have to be so worried about looking after all your gear.

Yes! It also reduces maintenance costs if your volume of gear is minimized.

That’s the conversation I had with Nigel (Wood) at the time when IR technology was beginning to be pushed to the forefront. Everybody prefers to play on a 4×12, including me. If you have the opportunity, yes give me a wall of 4×12’s! But can I do that? Most of the time, no. It’s the same with cars: do you want to drive a very fast, small, cute car? Sure, a lot of people want that, but if you have three kids it’s not going to happen!

60 years ago, your guitar amp was also your PA, if it wasn’t loud enough then no one could hear you play – it was as simple as that. So, each musician was in-charge of the sound that was brought to the audience. Nowadays, PA systems are very good; people can play with in-ears and all that gear is very affordable now. There is so much information available on the internet which explains how to use the gear and the solutions just became smaller and better. This can apply to technology in general – take phone cameras for example, they just keep getting better. 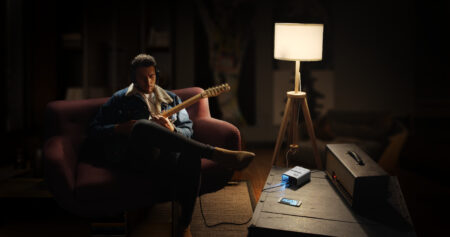 The state of technology today allows for very good quality and practicality, which probably wasn’t the case 20 years ago where you had to compromise a lot. If you wanted to use something that was small and compact, the tone and sound would suffer pretty badly. Today? Not so much. That’s where we’re going, and it will not stop. The guitar will stay, but everything after the jack output of the guitar will become smaller and smaller, up to a point where it wouldn’t be insane to think that this (Guillaume picks up his phone) would make a decent amp in the near future. I think that practicality, when it’s not a compromise, is hard to beat. That’s where the market is going, it just takes time. While the instrument itself is not evolving that much, everything else is changing due to the speed that technology is moving. It’s exciting times!

Yes, from a practical perspective smaller is generally better.

Yes, but there is also the fact that musicians are quite sentimental. Their approach is not necessarily entirely based on the result, it’s also based on how they achieve that result. There is value in how they make the sound they make, but that’s just a fraction. Most people just want something that works well and is practical.

So, what’s next for Two notes after the launch of ReVolt Guitar & Bass?

So, the ReVolt Series will be out soon! The other thing we’ve presented is a new software platform called GENOME. We currently have a plugin called Wall of Sound and GENOME will replace it. It’s a huge step forward for us and is significantly more flexible than its predecessor. We’re pushing a lot of investment into this new platform because we believe that it will really make our existing customers happy and will bring significant new customers to the Two notes ecosystem. We’re aiming to release GENOME in January next year.

That sounds brilliant. Good luck with that launch and thanks for your time today, Guillaume, we really appreciate it!

Thanks very much for the opportunity!