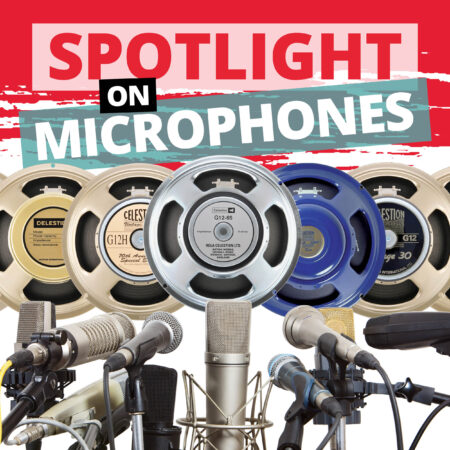 If you’ve already downloaded and used one of our speaker IRs you’ll notice that each speaker cabinet option features no fewer than 4 different microphones: the Royer R-121, the Sennheiser MD421, the Shure SM57 and the Neumann TLM 107.

You may be wondering why we used so many different microphones to create our impulse response download files and what the differences are between them. So in this blog we take a closer look at the each of the mics we used, why we chose it, and the typical characteristics of each one.

The Royer R-121 is bi-directional ribbon microphone, which has become renowned for its clarity and accuracy for well over a decade. It’s generally considered to be the go to mic if you simply want to get as faithful a signal as possible of what you are recording, with an absolute minimum of noise, distortion or added “colour” to the tone, and is therefore widely used among professional studio engineers.

The Royer is considered to be especially suitable for recording electric guitars, and is able to handle up to 135dB with close-to-zero distortion. That, along with a virtually flat frequency response, made the Royer R-121 an obvious choice for recording our speaker impulse responses, where we needed to capture a speaker’s

response at both low and high gain with maximum accuracy. So, if you’re using our speaker IRs to evaluate how our speakers sound, the Royer R-121 files are going to give you the most accurate impression.

Tonally, the Royer R-121 (pictured right) gives a smooth, warm, natural sounding tone – possibly as a result of picking up the reflected sound of the source instrument on the other side of the mic.

One criticism of the Royer is its sensitivity to placement – just a small difference in positioning can significantly affect the tone. Happily, however, this isn’t something you need to worry about when using a Celestion IR, as our expert sound engineers have done all the placement work for you, in no fewer than 6 different positions around the speaker cabinet.

The Sennheiser MD421 is probably the music industry’s best loved dynamic microphone with a design which goes back decades.

It’s a great all-rounder which works well for a range of instruments, including drums and electric guitar, as well as vocals. In terms of cost, it’s considerably less expensive than the Royer, so many guitar players and bands are likely to have used one at some point.

The MD421 isn’t quite as sensitive as the Royer in terms of position – you can place it almost anywhere in the vicinity of a speaker cab / amp and get a good sound, which tends to be rich and full. In terms of its response,  the MD421 is well known for having good bass roll off, which helps to cut out unwanted sources of low end noise, such as boomy drums or guitars, or even background noise (useful if you are recording at home). Generally this helps to smooth things out and give a more articulated, refined sound. Like the Royer, it can handle very high gain without distortion.

So if you are familiar with using the MD421 for studio or live work then head for the MD421 folder in your Celestion impulse response download folder to recreate the tones you’re used to.

The Shure SM57 is a unidirectional dynamic microphone which is used widely by pros and recreational musicians alike. Its lower price point makes it an easy choice for a guitarist just getting started with their first rig, but is unlikely to ever get thrown out due to its rugged build and its versatility – it works for acoustic instruments and vocals just as well as an electric amp. And, like the MD421, it can handle as much gain as you can throw at it without distorting. So our choice here was based simply on the sheer ubiquity of this mic, as just about everybody will have used one.

Tonally it sounds noticeably “rougher” than the Royer or MD421 (YouTube has numerous comparison videos for the SM57, MD421 and R-121 if you want to hear a comparison) but for many guitarists this is a distinct advantage. For instance, if you have downloaded the Celestion Blue or Greenback impulse responses for their ability to give a good thrashy or grungy sound, then using the SM57 mic option will enhance this type of tone.

As well as the 6 mic placements we used for the Royer and Sennheiser, we also used the Shure to record a rear cabinet position for our open back cabinets. This can be blended with one of the front mic positions to give a fuller sound. 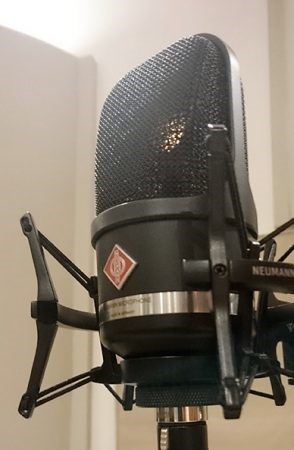 The Neumann TLM 107 (pictured right) is a studio quality multi pattern large diaphragm condenser microphone. Compared to our other 3 classic mics the TLM 107 is a relative newcomer (launched 2014), but has quickly established itself as a versatile, high quality studio microphone which gives smooth, accurate results with a warm, natural tone.

Because it’s a fairly new mic and because it is priced at a similar level to the Royer R-121, this isn’t a mic we’d expect most guitarists to be familiar with. However we wanted to include it in our IRs for its sheer quality, so we opted to use it as a room mic on all our speaker IRs. This means the TLM 107 was not placed in close proximity to the speaker cabinet, but at a consistent distance away, enabling it to pick up not just the speaker but all the ambient room tones also.

Within the impulse response download files you can opt to use the TLM 107 on its own, or mix it with any other mics, to give a generally rounder, fuller sound to whatever primary mic you’re using.

How These Mics Are Used in Our Speaker IR Range

Each of the 3 primary microphones (R-121, MD421 and SM57) were recorded in 6 different placements relative to each speaker cabinet. These positions were selected by our world class recording engineers to give the best range of tones out of each speaker. Each placement is named descriptively in the impulse response download files according to the type of tone they produce: Balanced, Dark, Dark 2, Bright, Fat and Thin.

And there is a TLM 107 recording for each speaker cab, available in 3 options – Stereo, Left or Right – which can be used on their own or mixed with any of the other IRs, as you wish.

Which Mic Option is Best?

There is literally no right answer to this question. We’ve selected the best range of microphones we could, and captured our speakers using all of them in multiple positions. All that expertise is contained within the impulse response files that you download. After that, the only reason to select one rather than another – or perhaps one of the many mic mixes available – is personal preference. So the “best” mic or mix is probably going to vary depending on the type of music you’re playing and the overall tone you’re looking for.

If we could make just one recommendation in terms of mic choice, it would be: experiment! You have so many combinations possible here that your impulse response files become a resource for you to play with and create tones you love.