What was the process?

I worked together with the Celestion guys on the studio engineering side of the IR production and completed mixing the presets that Celestion are going to offer with the main IRs we’ve recorded.

I recorded Celestion’s Andy Harper in his band many years ago—14 or 15. He tracked me down, and said, ‘We can see you’ve been doing all this stuff. I’ve got a little project, would you be interested in getting involved?’ We talked about it and I thought, this sounds fantastic.

Basically, I brought my skills to the table as someone who has done loads of recording; making #1 UK albums and working in America, for many years. Knowledge like, what microphone techniques I would use to record guitar cabinets, and then I also brought to the table traditional techniques that great producers and engineers, such as Eddie Kramer, John Leckie, Steve Albini, things that they would go to, microphone selections and positions that they would go to on classic cabinets.

Taking that Celestion have been making guitar speakers for years and supplying different cabinet makers for years, with all their classic speaker combinations, I knew that these guys would have been doing certain things a certain way for a certain reason. So, I coupled my knowledge from making records and recording guitars with their deep knowledge of speakers and as we whittled it down as to how many impulse response snapshots were needed per speaker, and then per cabinet. Then we came up with a plan for how we were going to do it and what mics we were going to use, what room mics we were going to use, and then we just recorded things in a way that I thought they would sound good.

It was challenging because you do an initial test with a guitar where you can hear a guitar in the room and it sounds fabulous and then it’s all about putting test signals through the amplifier. There’s no way of knowing how that’s going to sound until you convolve that impulse response and you hear it back through the software. Then you get an idea of what the results are. It was a fantastic process, but it was based on microphone techniques that I knew, how to get the brighter, fatter, thinner, darker sounds, one, two, three, five, even six-mic combinations, where we would use maybe two spot mics, a rear mic (for an open-back cabinet) then some room mics.

It was quite an expansive thing over quite a few days to record all of these impulse responses. It was seven different speaker types in five different cabinets: a 1×12 open back, a 1×12 closed back, a 2×12 open back, a 2×12 closed back, and a 4×12. Then a wide selection of the speakers that Celestion makes, from the Vintage 30s to the G12Ms, G12Hs, we did all of them. We virtually captured them in all of these different cabinets with different spot mics and different room mics. We’re at a place where we have all these different impulse responses of great traditional miking techniques in a really lovely room, in Cenzo’s room at Decoy, with some really nice mics. I think it’s fascinating; it sounds really good.

You recorded at Cenzo’s studio?

We recorded at Decoy, Cenzo’s studio. I’m a big Cenzo fan; I’ve followed him for years, ever since he was engineering records by The Smiths. We looked at studios all over, and we preferred the sound of Cenzo’s live room – it was perfect! And Cenzo was super accommodating. His team of assistants was brilliant. They have a great room and everything was perfect for this project.

How did it work in terms of recording the different configurations of cabinet and speaker?

We recorded the different configurations of cabinet and speaker one by one. Andy Harper from Celestion is an absolute technical genius. He had a very specific and discrete way of how he thought it would work. We had to remove speakers from cabinets in situ.

We wanted to make the process as efficient as possible; we were recording one set of speakers in one type of cabinet we had assistants in another room putting speakers into cabinets, to keep the workflow going.

We optimised efficiency as far as rotating the cabinets, and the speakers that were in those cabinets, and making sure that we always had something, as soon as the impulse responses for one cabinet had been done with one speaker, then another would be shipped in and we could start again quite quickly. Once we had done the initial testing and we knew that the sounds we were getting were good, whether they were high-gain or low-gain guitar sounds, as soon as we knew they were good, and then it was all about science and all about the very technical process of generating the IRs and doing things in a quick and efficient way. Also, in a highly skilled way, which meant lots of file management, lots of file naming and all of that sort of thing. It was quite a complex scientific experiment in the end that was based on something that is ultimately artistic.

Then you mixed them and balanced the different microphone combinations?

That’s the fun part, isn’t it? When you convolve these impulse responses that were recorded in a great room with some great mic techniques and start putting DI guitar amp tone back through those speaker impulse responses, then you start to get a real feel for how things should sound.

I work from my own studio up in North Yorkshire. I’ve spent a lot of money creating a little space that sounds really good with the right monitoring and a really nice Pro Tools rig. 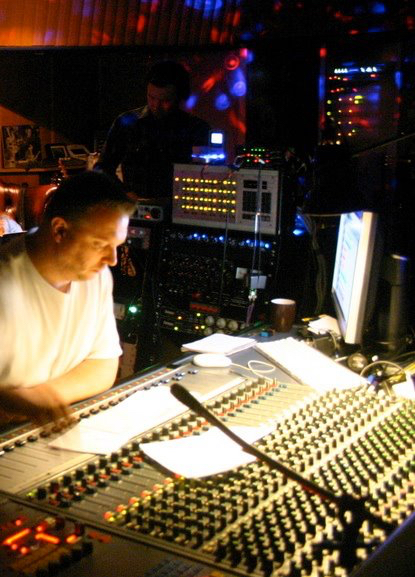 Sitting here and getting the blend of those microphones right is fabulous. It’s quite challenging, because what you’ve got to think about is what I think sounds good is usually a good marker, because I’d like to say I’m a good engineer with good ears. But ultimately that’s subjective, and people will hear things in a different way. What you have to do is balance the microphones, the impulse responses that we recorded, which were basically microphones in situ on a specific speaker in a specific cabinet. You have to make that sound match what people are going to want, based on classic tones.

If you’re a producer or a guitarist or an engineer looking to use your favorite amplifier in a situation that’s not ideal for live guitar recording then the IRs become a real game changer, I think, for the way that people are going to record guitars outside of an expensive studio’s live room.

If the IR is a known sound, the guitar player can then add his or her own technique, effects, and so on?

I’m guilty of this; sometimes when I’m mixing I open up a plug-in — reverb, compressor — and sometimes you just want something that you can go to that sounds good.

If you’ve got some presets there that you can go to and they’re based on classic tones, you open them up and, bang, it sounds great, maybe with a few little tweaks to suit your own personal taste. That’s what we’re trying to achieve with these preset blends. It’s something that’s accessible to a wide demographic of people with varying tastes. They can make minor tweaks, but they can get involved with making great guitar tones straight away with this software package.

Pete Thorn had been over and he said, ‘These have clearly been recorded by professionals, they sound really good.’ That was good for us! It was really nice to hear that he liked them and he thought they sounded great.

The team at Celestion has worked to make everything sound awesome.  I’m really pleased to be involved, because it was completely different for me. I just make records; I’m not the most scientific engineer. But I know about mic placement, tone, so it was really good to get involved with this and know now that we are getting somewhere where this is going to be really good, an invaluable tool for producers, musicians, engineers. That’s exciting, because to be part of that at inception is really quite rewarding.

People can work with these anywhere, from a project studio to a trans-Atlantic flight?

The way that records are being made now, people can work with these IRs anywhere. Budgets are getting smaller and producers are looking to do things in a cost-efficient way. You can go into a really nice live room for two or three days and record an album’s worth of drums — because you need a big space to record a drum kit — and take that back to your studio. Then you can run the guitar tracks through synths — that might be a bass amp synth, it might be a really nice guitar amp through the Celestion IRs — and you can start to make a record on a budget that sounds not just good but indistinguishable from what you could achieve in a big studio.

Ultimately, people can do it remotely, and are doing it remotely. This is why there’s a big demand for mixers now, because without the oversight of Mr. Well-Paid Producer and Mr. Well-Paid Engineer in a really expensive studio, without that quality control, people are going out and making brilliant records, very artistic and sharp and unique records, but they need the lens sharpened by a really good mixer.

You can see the benefit of these IRs again, because here I am, I’ve been sent an album where the tracking isn’t brilliant, and the guitar sounds are little sketchy. If people can get into the habit of taking a DI between amp and speaker cab, instead of a pre-pedalboard clean DI, if they can use a Radial or a Neve with a speaker-level DI output into their DAW and they can record that simultaneously with their miked guitar sounds, when a mixer gets that multitrack and doesn’t like the tone, or thinks he can augment that tone, he can reach for the Celestion package. That needs to sound like a Vox AC30? Bang, there it is. You can start to bring these mixes to life with much more authentic guitar tone in post-production, rather than use Native Instruments or Steven Slate. The potential of this is massive, from tracking through to post production. There’s a really exciting time ahead for this technology, I think.

And live, too, where it is repeatable and removes all the variables, such as consistent mic placement and the venue’s stage acoustics?

You’ve got to look at the Kemper, amps where you can put these responses in, maybe the Line 6 Helix, all these things coming to market that allow people to regurgitate sounds that they like, taking out the uncertainties of acoustic venues and spaces and quality of amp, etcetera. Consistency of tone will become as consistent as a guy with a recallable digital desk at front-of-house. It’s a paradigm shift of technological advancement when it comes to music production. Which is quite scary; I just hope there are some traditional techniques that still need to be called on or I’m unemployed!