Hot on the heels of the G12H-150 Redback impulse response comes the release of the new Celestion Neo Creamback speaker IR. 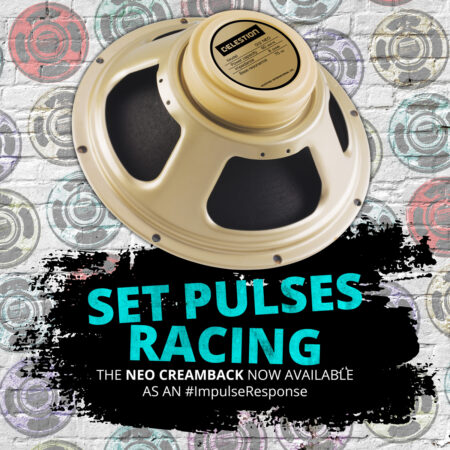 What type of tone can you expect from the Neo Creamback impulse response?

Like all our speaker IRs, the digital version of our speakers is almost identical to the real thing, so let’s look at the tone of the physical Neo Creamback.

The Neo Creamback is one of the newest speakers in the Celestion range, launched in 2016. In terms of comparing it to other speakers, it is most similar to the G12M-65 Creamback, combined with elements of the G12H-75 Creamback. The overall result is a familiar Creamback tone, with the same vintage feel, but with a few of its own unique touches. Expect a punchy low end, warm mids, some crunch in the upper mids and highs that are sweet and refined.

To hear the Neo Creamback tone for yourself, check out the Listening Resources section below.

Why Buy The Neo Creamback IR?

If you currently have a G12M-65 or G12H-75 Creamback in your cabinet (or perhaps 2 or 4 of them) then one of the biggest advantages of switching to the Neo Creamback is weight. The Neo weighs just 1.9kg/4.2lb, compared to the 3.6kg/7.9lb of the G12M-65 – a big help for those who need to carry cabs around for a living or even those of us who only need to move their cabinets around occasionally.

And if weight is an important issue for you, using impulse responses instead gives you the option to ditch the speaker cab completely, any time you need to, allowing you to practice, record and even perform cab free, retaining the tone you’re used to between physical and digital playing sessions.

In fact, there is a growing trend for professional musicians to use impulse responses not just in the studio, but in live performances too. Having access to the digital version of your favourite speaker allows you to set up virtual “rigs” to take with you on live gigs, to deal with any situations where you can’t use your physical speakers (e.g. where there are space or access issues) or where the venue PA isn’t up to reproducing the true Celestion Creamback tone that you want your audience to hear.

One area where having the IR offers particular value is when recording and mixing. If you were to record a guitar track using a physical Neo Creamback speaker cab setup, the tone you get will be greatly influenced by the physical characteristics of the mic you used, where you positioned it and the acoustics of the room – you would then be very limited in terms of how much you could alter that tone without physically changing the setup and making a new recording.

Using an impulse response for recording and mixing provides you with much greater control over the final tone, as well as reducing the time you need to achieve it. The Neo Creamback IR library (as for all our speaker impulse responses) provides you with 18 different basic mic options (3 different microphones recorded in 6 different positions), plus another 8 mixes that combine different mics. In a digital setup you can quickly switch between all these tones to find the right one for your recording, without having to re-record your track.

So if you’re involved with any type of studio work, using the impulse response instead of the physical speaker cab can greatly enhance your workflow as well as the creative possibilities open to you.

Listen to some Neo Creamback IR samples and buy here.

Find out more about the physical Neo Creamback here.

Back to back comparison of the Neo Creamback, G12M Creamback and Alnico Cream in a 2×12 cabinet. Good for comparing the Neo with the original G12M Creamback.

The Neo Creamback is sampled across a range of different playing situations including rhythm, lead, single string, solo and quad tracking.