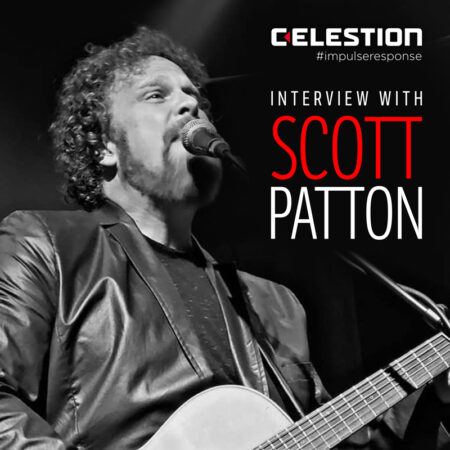 In our latest interview, we checked in with Scott Patton, a well-known guitarist and record producer. Known for his work with Sugarland, a Grammy award winning country music group – where he was first musical director and then band leader. Scott also collaborates with Jennifer Nettles, Sugarland’s singer, on many of her outside projects.

Here, Scott explains how IRs have helped to revolutionise the music scene, both live and in the studio.

How long have you worked with Sugarland?

What’s the story behind you hooking up with them?

I started working with Sugarland because I had a good relationship with Jenn (Nettles), the singer, beforehand. I had a studio in Atlanta and produced records and mainly worked in the studio environment. She came to me and we did three records together before she was involved with Sugarland – it was called the Jennifer Nettles Band then – that’s how we met.

In a nutshell, Sugarland was an entity before her – there was a different singer originally and they were making some changes. Once they were signed up, she asked me to be a part of it. This all happened between 1999 and 2003.

What were you doing before Sugarland?

I’ve always been in music – I was a part-owner in the studio I mentioned where Jenn made her records – it was called Exocet in Atlanta. I started there as an intern; I’d gone to college and taken an internship there in the early ‘90s and that eventually led to me being a partner in the studio.

Tell us a bit more about your role of ‘Band Leader’ for the current line-up of Sugarland? What does your day-to-day life consist of?

Well, there’s a lot of organisation that needs to happen. Someone had to be designated to get music stuck together and do the work that needed to be done to prepare not only for shows, but awards ceremonies and things like that.

So, it’s primarily my responsibility to make sure the show is going to work from beginning to end – not only musically, but some technical aspects of it as well. At different times, my role changes. Sometimes it may involve the opening sequence of a show – from the music that’s happening, to when the band come out, etc – to making sure the flow of it all works.

How did you first hear about Impulse Responses?

Dan Boul of 65 Amps was the person who turned me on to them. I’ve now done about a year and half’s worth of touring using a Kemper and always thought I’d be a tube amp person. Never in a million years did I think I’d do the modelling thing!

When Sugarland’s not working, I’m always off doing other projects – often with Jenn as a solo artist. She’d put together a Christmas record that ended up getting scored for some phonic use, so we did several runs where we were in symphony halls throughout the United States. And in those situations where you go into a symphony hall with an amp – it really angers people! They just don’t want you to have anything that loud there! They’re not used to it, it’s not comfortable and it kind of makes for a miserable time… it literally will turn the day sour!

So the idea of a Kemper, or something like that, seemed appealing as it doesn’t have to make any noise and we can just tuck it away – so, I bought one and it sounded great! I had no idea if it would work in terms of doing what I needed it to and found out during those dates that it worked really well. As I started to refine it, I began thinking what I might want to do with it beyond those particular arrangements. In those cases, they were mostly Christmas songs that were playing along with a full orchestra and it didn’t necessarily translate to do what I do with Sugarland or other places.

I then just started talking to Dan and he mentioned he was creating IRs which I thought was interesting for someone so dedicated to the tube amp world! He explained how much of a difference speaker IRs can make and he sent me a few things, which led me to reach out to Celestion – because I’ve always used Celestion, as far as speakers go!

And I found the same thing was true there – where I could insert a Celestion patch into something I thought was just OK and suddenly it turned it into something I loved – you know, a lot of that is just my preference and what I’m used to. It’s kind of amazing to me still that it makes such a big difference, but it really does!

Are there any specific IRs from Celestion that you prefer?

The Alnico Blue is a popular one with me. I also like the G12(H)30 and I have a couple of Creambacks. I also tried the new Celestion Ruby which I thought sounded great too. But I find myself going back to the same ones over and over again.

So do you mainly do live shows with Sugarland using a digital set-up with Kemper profiler these days?

My live set-up is through a Kemper but I’ve got an amplifier on stage that I’m feeding from the monitor out of the Kemper. I’m sending it to the return side of an effects loop of a tube amplifier and that goes out to a 2×12 65 cabinet. They do a split – so that’s an Alnico Blue and a G12(H)30.

And that cab serves a couple of purposes: a) In case I want to pull an in-ear monitor out briefly and hear some of that stage volume, I can – it provides some physical vibe on stage. And b) If for some reason or other the Kemper went down, the amp is on and its ready to go – so I can just take the leads from my pedalboard and plug them into my amp and essentially go old school. Although thankfully, after two years of using the Kemper on stage, this has never happened!

How do you see IRs changing the way guitarists work?

I see a lot! I see it everywhere and can’t believe how popular they’ve become! They give you access to a lot of tones quickly and offer a lot of options you’d normally have to do a lot of work to achieve, such as setting up a load of different amps, etc. So there’s that aspect of it, but I think the sharing aspect is pretty interesting as well – the fact that I can just email somebody a quick recall of a studio session and the amps that I used – all that stuff changes things pretty dramatically.

And I think as a consequence, you start thinking about it a bit differently and you start thinking about your options and how you’ll do it simply because you now have those options with regard to re-amping and getting back into things. IRs just open up a whole new world of possibilities! For sure, I see IRs absolutely everywhere now, which is just mind-boggling.

Tell us about how you use IRs at work…

I use IRs all the time! If I’m using the Kemper and I’ve in many ways officially switched to that these days, even in the studio. However, I do still have a studio and workspace in which I have several amps that can be easily turned on, but I’ve now become so familiar with the Kemper world, I find it easier to just go that route. So I’ll just take that exact same rig and a back-up rig of what I use live and have that in the studio with a pedalboard.

But the vast amount of options available with Celestion IRs mean that once I find a speaker and cab combination that I like, I tend to stick with it. And I use that for everything now! For example I’m working on a project right now with Jenn that includes some Broadway songs she’s doing in her own style and we did them all up in NY and rather than using an amp, I just brought a USB stick with a rented Kemper, plugged it in and everybody just loved it! I was expecting the whole time for someone to look at the set-up and say, “Hey, can we use a real amp?” …but that never happened! People always seemed glad to see the Kemper! Everything I record these days goes through a Celestion Impulse Response and it just sounds great!

Have you found any surprising or unexpected benefits of using IRs?

There may have been a profile or two that was close or something that I thought was pretty good but not quite right and I found that the IR would correct a lot of the things that I didn’t like about it! My first thought isn’t always ‘Oh, it’s the speaker or the cabinet’, you tend to think the issue is with the amp.

What I found with the IR world is that if you’ve got something in terms of a profile and you’re tweaking it and trying to get everything just right, I can just change the profile to include a Celestion Impulse Response and find that I suddenly love something that I didn’t a moment ago! Suddenly it’ll just sound right to me.

What are your future plans?

We toured throughout the summer and so now we’re into one-off shows. On November 15 we are playing a charity show in Atlanta. There’s nothing really scheduled live for the rest of the year, things will start up again next year. We’re kind of like reverse teachers, so we do most of our work in the summer months.

Otherwise it’s mostly studio stuff. I produce a lot, and I write a lot. People will call me up and they want to make records. I’ve got a production space not too far from my house and I can go and do anything I need to do in there.

Whatever I do, Celestion is just part of my sound – I just can’t imagine not going that route. It’s just a sound that I like.