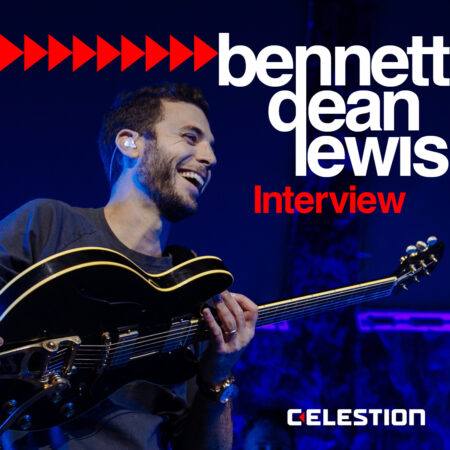 We recently had the pleasure of sitting down with Bennett Dean Lewis to chat about music, gear and the CelestionPlus Magnificent 7 Impulse Response Collection.

“Like a lot of people, I started playing guitar young. I never really considered it as a career option until college,” reflects Nashville-based musician Bennett Dean Lewis. Given his career since, it’s a good thing he did. Since his first bar gigs in Athens, Georgia, he has supported such diverse talents as country-pop ingénue Lera Lynn, indie-rock darlings Of Montreal and most recently, acclaimed Sony-Columbia artist Maren Morris. While his stylistic range has naturally led to a lifelong quest for perfect tone, the demands of constant gigging and recording have made a streamlined amp rig and trouble-free monitor mixes just as important. Lewis recently discovered how Celestion Impulse Responses — accurate digital representations of the company’s legendary guitar speaker tones — deliver on both counts.

What first led you to try Celestion’s Impulse Responses?

First of all, I’ve always been a fan of Celestion’s physical speakers. I mean, you could really say they defined the sound of the electric guitar. But it’s funny that I got into impulse responses at all, because I’m sort of the stereotype of the simple-minded guitarist. I like to run a Telecaster through a few pedals into a good amp, and that’s usually it. If it’s time to open up a laptop and learn about MIDI or anything like that, I’m behind the curve! [Laughs.] However, in live performance I’ve always had issues with mic bleed and my in-ear monitor mix not being as clean as I’d like. I started wondering, if you could get rid of the speaker cabinet and therefore the mics pointed at it, could that improve the mix?

How did you come to see Celestion Impulse Responses as the solution you were looking for?

I started seeing these new devices pop up on top of a lot of my favorite guitar players’ amps. Reactive load boxes. This is basically a box that interacts with a tube amp head like a speaker cabinet would — your amp sees the same impedance and reacts to the load in the same way. That gets you a far more realistic tone than just taking a direct out from your amp into the P.A. Some of them also run plug-ins or impulse responses for speaker emulation. With Maren Morris, we were working with Roland at the time they came out with their load box, which is the BOSS Waza Tube Amp Expander. The Waza is where the Celestion IRs “live.”

Tell us more about how your guitar rig is set up.

One of my staple amps is a 1966 Fender Deluxe Reverb. It’s gorgeous. When I’m out with Maren, I use a Morgan SW50R. This is a boutique amp head that uses 6L6 tubes, takes pedals great, and does a wonderful clean tone. It’s comparable to a Dumble or something like that. My guitar runs into my pedalboard, the pedalboard runs into the Morgan, and the speaker output of the Morgan feeds the input of the Waza. In turn, the Waza has stereo XLR outs that feed the monitor mix and front-of-house P.A.

Which Celestion Impulse Responses do you use in particular and what’s your impression of them so far?

I started with a bundle called the Magnificent 7. It’s sort of a greatest hits of Celestion’s classic guitar speakers. The two from that collection that I keep going back to are the Alnico Blue and the Vintage 30. I have those set up in 1-by-12 and 2-by-12 configurations, as the IRs simulate the cabinet design as well as the speaker cone itself — open-back, closed-back, all the options. The Blue has this high-end presence that, for some reason, really helps with my in-ear monitor mix. It just sounds frickin’ killer. The cool thing, too, is that you can run a 50-watt head like the Morgan into the speaker simulation at full power, which in the real world might blow a physical speaker. The Waza has a through output for an actual cabinet, which you might use to record a miked signal along with a direct signal in the studio. Onstage, we’re not doing that. Point being, the Celestion IRs sound so good that we don’t have to!

Did removing the cabinet clean up your mix as you’d hoped?

When we first got a demo unit of the Waza, I was skeptical because it was new technology. But it absolutely blew me away. The difference was immediately night and day — the highs were cleaner, the lows were tighter, I could hear myself more clearly, and the guitar just cut through the mix. That was the start of it for me.

A lot of guitarists are skeptical and think nothing can replace a real speaker cone. What’s your take on this?

In a live setting, you totally gain a lot more than you lose by using the Celestion IRs. The benefits to your monitor mix, to making the front-of-house engineer’s job easier, to the general cleanliness of everything, are just huge. It’s also a lot easier to keep your stage volume manageable. For realism, the Celestion IRs are spot-on. If some guitarists miss something, I think it’s only the sense of air moving behind them from a cabinet, but I don’t really miss it. Another cool thing is, you can throw a hair of room reverb on the final output, which spreads the sound out in a realistic acoustic fashion, especially if you run in stereo as we do.

How about latency? Are you satisfied with the response from the instant your pick hits a string to the sound you hear?

Absolutely. Using the Celestion IRs produces no latency that I can hear, at all. It just feels like I’m playing guitar through a very well-miked speaker, but again, without the feedback, bleed, or any other issues that come up in a loud, complex acoustic environment like a concert.

You mentioned being somewhat tech-averse. Do you find the Celestion IRs easy to use?

Yes. You do the initial setup with a computer but it’s really simple — you just drop the IRs onto this editor software and the Waza box has four slots for saving them. At the gig you can just select them with a knob, so you don’t have to bring a laptop onstage or anything like that. Which I don’t want to do because I’m not a keyboard player! [Laughs.]

Are the Celestion IRs useful in the studio as well as onstage?

Absolutely. Of course, it’s fun to mic up a vintage cabinet with great microphones. But sometimes that’s not practical, especially if you’re recording songs in a home studio. Say you need to crank up your amp to get the right tone. I have a 1961 Fender Bassman that’s amazing, but through a speaker cabinet it screams. Plugging that kind of head into the Waza and running through a Celestion IR, you get this killer cranked amp tone, only without pissing off the neighbors. Or, your room acoustics might not do justice to a miked cabinet. Or, you might be starting out and not own a several different cabinets and mics to experiment with. With the Celestion IRs, you can have all the benefits of studio-quality recordings in spite of all that.

With gigs and sessions postponed due to the coronavirus, have the Celestion IRs made it easier to work remotely?

In fact, two months ago or so I did a remote session. I didn’t tell anyone what my signal chain was, and the clients emailed me asking, “Man, this sounds great! What kind of amp and cabinet are you using? Which mics?” When I tipped them off that there was no cabinet and there were no mics, they could hardly believe it. Again, if you’re working from home in a compromised room, the Celestion IRs actually sound better than miking a cabinet. You won’t have issues with fluttery reflections, phasey sounds at certain frequencies, any of that stuff that comes from recording in a boxy room or one that doesn’t have acoustical treatment. You can even take the final step of adding room simulation to the track in your DAW. With that plus the Celestion IRs, it sounds like you recorded some rare and expensive cabinet in a world-class space.

Would you recommend the Celestion IRs to a beginning tone quester?

If you do much recording, the Celestion Impulse Responses give you a whole arsenal of different speaker cones and cabinets. You’re not just stuck with the sound of the one or two amps you might have. That’s great for me because I’ve always been a jack of all trades, though I admire musicians who are more disciplined in one genre. I like everything from new country to Bowie to jazz and classical, so it’s great to know that with the Celestion IRs, I can have the appropriate tones at arm’s reach. For live use in the Maren Morris band, the Celestion IRs have been a complete game changer. There’s definitely a renaissance of guitar “tone questing” going on right now, and this impulse response technology is at the center of it. I’m eager to see where it all goes.

To learn more about impulse responses and the Magnificent 7 bundle, follow this link.

I had these guys in Nashville called XAct Tone Solutions design my pedalboard. They’re very gifted at building bulletproof touring rigs. I have a Source Audio Nemesis and Ventris as my delay and reverb, respectively. They’re a good middle ground between the large-format Strymon stuff and something like a little BOSS pedal. They have MIDI and a lot of other functionality. I have the Analogman King of Tone and I’m super pumped on that. The J. Rockett Archer Icon for lead boost. I’ve got an Xotic Effects RC Booster, which a lot of the session guys use in Nashville — it’s sort of an always-on preamp thing. I like the Goodrich volume pedals. XAct Tone also has a pedal line called XTS, and I have their Imperial overdrive.