If you’ve ever played Forza Motorsport 6 or 7, watched the animated Wolverine series, the trailer for the new Han Solo movie or listened to the recordings of Philip Sayce, the chances are high that you’re already familiar with the work of Michael Nielsen. A professional composer and music producer for two decades, Michael is one of the creative forces behind Ninja Tracks, a Los Angeles-based music production company responsible for scoring a string of high-profile video games, film and TV trailers and countless advertising campaigns, as well as producing and writing for a host of legendary music artists.

He’s also a pretty handy guitar player (which you’ll know if you saw our blog featuring his recent video comparing a range of IR load boxes) and a Celestion Impulse Response user. So, we decided to track him down and find out more about how he got into using IRs and how they have impacted his work.

Q: What was your experience of using impulse responses before Celestion launched their range?

MN: I started experimenting with IRs about two years ago. The first time I used them was on a score for the NASCAR expansion to the Forza 6 video game. They wanted to bring in a sense of Nashville, so I decided to use my Fender amps – but there was a lot of experimenting and figuring out the tone of the music, which required going back and doing revision after revision. I needed a consistent recording path, so I could go back to a particular cue or song and get that exact sound if I had a change of section – so I thought the IRs sounded like a really great path for me.

But I was having a lot of trouble finding actual IRs that sounded balanced enough that I could be confident that it would hold up till the end of the mix. So I would be flipping through 100s of IRs and I’d settle on one, but sometimes towards the end of the mix, I’d be a little disappointed with the guitar sound and I’d have to switch to different IR. However, I had already committed to these decisions on the front-end of the amp that locked me in a little bit. So, my early ventures were OK, and I could see the idea was great, but I was having trouble pinning down a great sound out of it.

Q: How did you find out about Celestion IRs?

MN: Actually, I was listening to a podcast with Scott Henderson [a Celestion Partner in Tone!] and he mentioned that he was thinking of IR-ing his cabs. And I was thinking at the exact same time that I should make IRs with my own cabs, because I wasn’t really happy with the IRs that were out there at the time. Then Scott said that once he heard the Celestion IRs, he thought that they were better than anything he could make on his own – so that seemed like a pretty good endorsement. And I found the same thing; once I got them it was like, “Oh, finally, here’s some nice, balanced IRs!”

Q: Which ones did you try first?

MN: The ones I know best as speakers – the Vintage 30s and the Greenbacks.

Q: Do you have the whole collection now?

Q: Do you have any favourite or go-to IRs that you use a lot?

MN: The Vintage 30s and the Greenbacks are still my first go-to’s. And the A-Type – I think the A-Type is really interesting. I like the way they are all consistently organised with, for instance, the Dark and Thin [mic placement options], and they are sonically consistent from bundle to bundle. So I’ll go to an IR pack and just go right to the Thin and check that out. The ‘Thin’ versions sound very mix-ready to me.

Q: Do you use physical cabs and speakers? 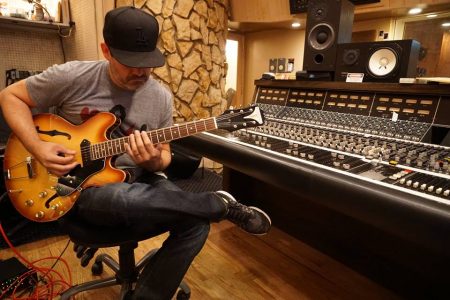 MN: Yeah, I have a Bogner 4×12 that’s set up with a Lynchback, a Vintage 30, a Greenback and an old EV speaker in there. Then I have several combos and an old 2×12. But I don’t really have the space to have endless cabinets, which can be limiting tonally – and that’s where it’s nice having access to IRs. So when we were working on Forza 7, the whole thing was very rock-based, and they wanted to have a sort of vintage guitar feel. I used my real cabs for around the first 10 songs, but the cab and speaker is such a big component of the sound – that’s when I used IRs a lot to dial-in a new sonic signature to what was going on.

Q: Do you have a particular example of some work that used a Celestion IR?

MN: Yes. We did the trailer for the new Han Solo movie – that has a piece of music that I wrote that was very guitar-based. (See below for the trailer)

Q: Have you found any surprises or unexpected benefits of using the IRs?

MN: Yeah, another great thing about the Celestion IRs is the separate files for Room mics in there. So, if you want, you can use your actual mic’d up cab, but add in the Room IR, which gives it a really nice stereo room sound behind it. So, you can be a purist and keep your real cab sound but use the Room IR to create a lot of dimension around it. And it can sound a lot nicer than a digital reverb – a lot more natural.

Q: What advice would you give to someone getting into IRs for the first time?

MN: Well, I feel like the Vintage 30 for modern amps is used as a standard for what speakers and amp manufacturers aim at or voice their heads to. So, one of the scary things about the [non-Celestion] IRs sometimes is that you don’t really get a correct balance, or there’s some weird phasiness, so you end up setting your amp very strangely. But with the Celestion Vintage 30 IRs, it sounds really similar to my cab, so I was able to set my heads up normally and they sounded like I’m used to, or very similar to that.

So, if you’re pulling up an IR and you’re setting your head to a drastically different setting, I would say, if you’re new to this, start with an IR that is similar to what you’re using before you go down that rabbit hole.

Q: How has using IRs changed your way of working as a professional?

MN: I think it’s just opened a lot of new doors sonically. Before, I was limited to the one or two cabinets that I had set up. To get a different sound, I could get another cabinet, but then I’d have to have get another microphone, a mic preamp, and mic setup… The cost of having a vast array of cabinets would get huge really quickly. So the IRs give me that huge tonal palette to work from really quickly.

Check out the trailer for the new Han Solo movie here:

Find out more about Michael’s production company Ninja Tracks and his extensive portfolio at their website.