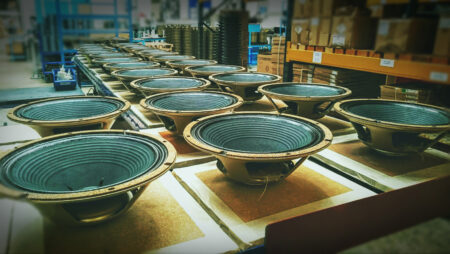 The great thing about Neo (Neodymium) magnet speakers is that they don’t weigh much. In fact they are much lighter than their ferrite magnet cousins.

The subject of this piece – the Neo Creamback – is roughly half the weight of its G12M-65 Creamback brother.

So what has that got to do with Impulse Responses?

Well, the reality is that even with everything else being the same, guitar speakers with different types of magnet assemblies sound different. Let’s go back a step though and look at the effect on tone you might expect from different magnet sizes of the same type.

All have ferrite magnets, but the M and H indicate weight – Medium (35oz) and Heavy (50oz).

As you might expect the H magnet produces the stronger magnetic field. Broadly speaking, the effect on the tone is that the speaker cone assembly responds quicker to the input signal giving more impact and perceived tightness and “speed”. As the cone assembly moves back to its resting place though, the stronger field damps its movement faster, meaning the acoustic output from it stops faster, the perceived effect on tone being that the bass is not as “fat” as the M equivalent.

Obviously there is a great deal of other things happening as well, but this illustrates a typical effect.

As a broad brush comparison here’s how the different magnet types affect tone. 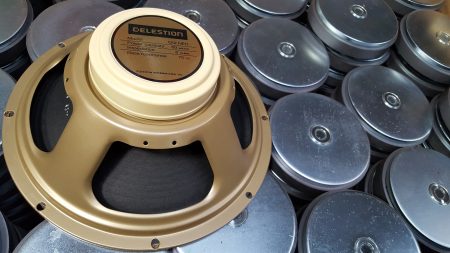 Alnico is an older and heavier magnetic material, bringing with it additional weight and aspect ratio in order to achieve the desired shove on the cone assembly. It is also unusual in that it is electrically conductive. Alnico based drivers often display an ability to compress in a pleasing way and have a certain soft detail about them. The combination of this with a fine bell like quality and spaciousness around the tone makes them something of a benchmark for guitar speaker perfection.

Neo based drivers, by the very nature of the smaller size of the magnet, have less steel in the magnet assembly compared to ferrite speakers of equivalent performance, for instance. The steel has an effect on the higher guitar frequencies, causing them to be muted a little. This effect is much smaller on Neo speakers and can cause a peakiness and high-frequency prominence which can be fantastic, but isn’t always to everyone’s taste.

So back to the Celestion Neo Creamback. Our engineers spent a great deal of time designing a speaker that we would be happy wearing a Creamback can and where we could make sure that rising high-frequency was tamed without being shut down. We have used some special new techniques to create what has become a very fine speaker in its own right.

The result is a speaker that combines the punch of a ferrite speaker with the shimmering tone of the best Alnico ones along with a race car growl that is all its own.

Forget any discussions about weight, which of course don’t apply to IRs anyway – The Neo Creamback is all about Tone.