Six months after the successful release of the Celestion speaker impulse response range, we talk to the IR development team to find out what the reaction has been like, and what plans they have to develop the range in the future.

What reaction have you had to the initial range of Celestion speaker impulse responses?

Reaction to the IRs has been overwhelmingly positive from everyone. In fact, if anything we were surprised quite how immensely positive the feedback has been, particularly regarding the quality and faithfulness of the tones. Customers have totally understood what we are trying to achieve and sales reflect that.

The reaction from professional musicians has been fantastic too. We’re seeing a number who are

integrating the IRs into their rigs, both for studio work and live performances. And, more widely, the desire to experiment is high, amongst pros and amateur players alike.

We’ve even seen the birth of a few “IR babies” in the last couple of months – a number of well-established musicians have released singles and even whole albums that have used our impulse responses right the way through the production process, from initial composition to final release. This has really proven how useful a high quality IR can be as part of the overall creative process.

Celestion IRs can be used on a wide variety of different modelling hardware and amp simulators – what’s been the reaction from those manufacturers?

We’re definitely pleased that we took that approach – to make the IRs as compatible as possible with a wide range of different gear. Customers are liking that, but it’s proving popular with some of the manufacturers too, in a way we weren’t quite expecting.

We have had conversations with a number of prominent digital modelling/profiling hardware and amp simulation companies and we’re working on integrating/partnering our IRs with them.

They like the fact that the way we’ve designed and organised the IR files is very intuitive, and they can easily see how they might work with us to add further value to their great products.  For instance, we’re already offering 2 special free mixes for customers of the recently released Headrush Pedalboard. I’m sure there are more positive conversations to come.

Are people using them in the way you expected?

The main use has been what we intended – someone downloads the IR of their favourite speaker in their usual cabinet configuration, so they can get the tone they are familiar with when they are practicing at home, recording or maybe even playing live. 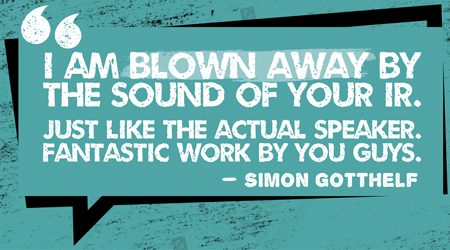 But we are seeing more experimental uses too, which we’re really pleased about. So, someone might get the whole IR library for a particular speaker (e.g. the 1×12’s, the 2×12’s and the 4×12) and start blending them together in new ways. So they’re finding ways to get new tones out of the same speaker.

Some customers are going even further and getting multiple speaker IRs and mixing them to get completely new tones – like mixing a Celestion Blue with a Creamback, for instance.

Is there a clear favourite within the range?

The G12M Greenback and Vintage 30 4×12 IRs are by far and away the two most popular.  In fact, four out of the top five are 4×12 IRs – the other being an open backed 2×12 with Celestion Blues. Can’t think why that might be! Something to do with the very popular Vox AC30 perhaps…?

You launched two more IRs just recently – do you have any more new impulse responses coming down the line?

Yes – we launched the Redback in April and then the Neo Creamback in June.

Any time now we’ll be launching an impulse response for the A-Type speaker, followed shortly after by the Alnico Cream.

Do you envisage eventually having an IR for every guitar speaker in the Celestion range?

We’re aiming to cover all the tonal bases in the standard Celestion guitar range, which means the majority of 12” guitar speakers will be available by early next year. We’re also considering releasing IRs for 10” speakers in the first half of 2018.

After that, we see many different directions we can go in. For example, we have a large back catalogue of speakers that are no longer available, as well as some great sounding prototypes. Why not look at making IRs for these?

How has the IR market evolved since you launched in January?

I think it’s evolved quite a bit. We’re seeing much greater interest and awareness generally – hopefully the emergence of a really high quality option has helped that.

We’re noticing that the number of people searching for impulse responses online, and specifically Celestion IRs, has increased significantly in the past 6 months, which suggests a growing awareness.

Overall, we expect the whole market to keep growing as more and more players and musicians realise what these IRs can do for them.

In our first interview with you in January you mentioned the idea of having IRs which were physically impossible to do in the real world but enabled new sounds. Have you been working with that idea any further?

Yes, it’s one of the things we’re really excited about, and we’ve started implementing this idea. One of special Headrush mixes we mentioned just now is called the “Impossible 8-Mic Mix“ because it blends the tone from 8 mics, all in the same position – which wouldn’t be possible in reality, but in “Digital IR Land” we can do it really easily.

We have lots of great ideas for hardware that wouldn’t be viable in the real world, but we could produce an IR for. For example a 1-watt rated guitar speaker that could be used with a 100-watt amp as an IR. In the real world, you’d just end up blowing the speaker with the excess power going through it, but with an IR this problem goes away.

People have noticed this with the Alnico Blue too, which is a 15-watt speaker. Using it in impulse response form lets you get the great tone of the Blue at much higher gain without worrying about blowing anything up.

And, as well as having impossible IRs based on a single speaker, we also want to try speaker hybrids and other impossible permutations. The possibilities are pretty much limitless and a really exciting prospect for the future.